Cracks in Bihar alliance as JD-U, Cong stay away from Lalu’s dharna over demonetisation 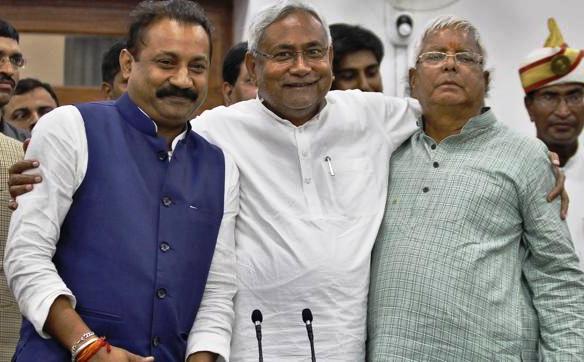 PATNA: Cracks in the ruling Grand Alliance in Bihar came out in the open on Tuesday as both the Congress and the JD-U announced not to join the RJD’s protest programme over currency ban.

The RJD has planned to hold a massive state-wide dharna (sit-in) across the state on Wednesday to register protest over the demonetization drive by the Indian government but both its partners have taken an altogether different stand.

“The Congress will not be joining the dharna programme of the RJD tomorrow,” state Congress president Ashok Chaudhary told the media on Tuesday.

The JD-U also served jolts to the RJD by making similar announcement.

“The chief minister has supported the currency ban, terming it as an effective means to curb black money in the country. We will be reviewing our stand on completion of 50 days. Till then there is no question of joining any protest programme over currency ban,” declared JD-U spokesman Neeraj Kumar.

The RJD denounced the moves of both its alliance partners, describing them as a severe assault on unity.

“Congress move has pulverized the unity in the Grand Alliance. The Congress should think over it,” remarked RJD vice-president Raghuvansh Prasad Singh. He also slammed the JD-U over the issue, asking the latter to correct its stand.

The RJD claimed its dharna against notes ban would elicit huge response from the society and will be a grand success.

“Our agitation will be historic,” claimed RJD chief Lalu Prasad.

Decked-up Patna turns into a ‘city of Sikhs’, devotees ‘overwhelmed’ by hospitality