COVID-19: Delta Plus variant cases spread to 11 states in India

NEW DELHI—The Union health ministry on Friday said the number of Delta Plus variant cases of COVID-19 has moved to 48 in the country.

A maximum of 20 cases have been found in Maharashtra, followed by 9 in Tamil Nadu, 7 in Madhya Pardesh, 3 in Kerala, 2 each in Punjab and Gujarat, and one each in Orissa, Rajasthan, Jammu and Karnataka. 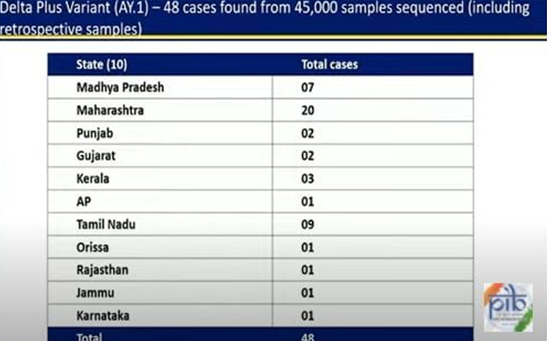 “Wherever you find a cluster, you have to contain it,”director-general of Indian Council of Medical Research (ICMR) Dr Balram Bhargava was quoted as saying by Hindustan Times. According to him, the second wave of the pandemic is not yet over.

According to health officials, the Delta variant which was first reported in India, had limited presence till December.

In March 2021, the variant was detected in 52 districts but now in June, it has spread to 174 districts across 35 states.

COVID-19: Third wave unlikely to be as severe as the second wave, says new study