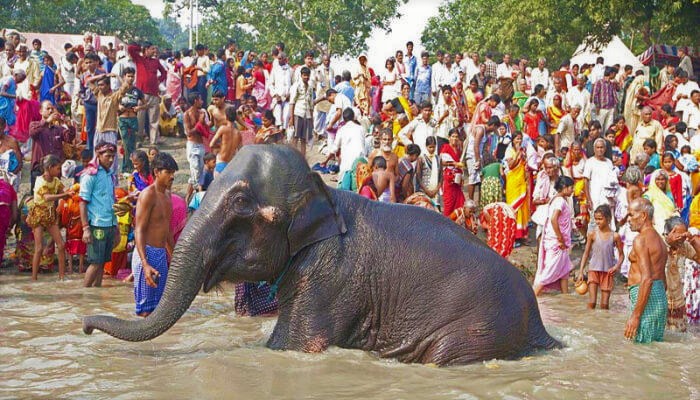 PATNA, INDIA—COVID-19 fears have cast its dark shadow over the world-famous Sonepur cattle fair of Bihar as well.

It’s for the first time after the Independence that the famous cattle fair won’t be organized in Sonepur at the confluence of Ganga and Gandak which is also regarded as a holy place for the Hindus.

Traditionally, the fair started from Kartik Purnima but this time it has been put off keeping in view the coronavirus fears as a result of which the entire fair premises wear a deserted look.

On this day—during Kartik Purnima which was celebrated today, the devotees take dip in the confluence of the river and offer prayers to Lord Hariharnath with which is associated the Gajendra Moksha legend.

Legend has it that the Lord Vishnu had saved the elephant by killing the crocodile with his ‘chakra’ (wheel) after it caught the elephant in its mouth.

The day also marked the beginning of Sonepur cattle fair, most popular as Harihar Kshetra fair which attracts visitors all over the Asia.

The fair draws its name from the mythological Harihar Nath Temple, believed to have been originally built by Lord Rama on his way to the court of King Janak to win hands of Sita.

Of late, Asia’s largest cattle fair which once used to draw huge crowds of prospective buyers of animals and visitors from across the world for the kind of colours and legend attached to it, is now battling hard for survival.

The fast diminishing number of animals at the fair site, reluctant buyers and harsh-going laws to protect animals have reduced the once famed fair to a simply “fun fair” with the crowds now looking more interested in enjoying night theatres, Ferris Wheels or magic shows whose numbers have interestingly grown up in recent years.

Now, the cattle fair is more known as a market of rural items, handicrafts, clothes, food items, village implements, furniture, costume jewellery, folk toys and utensils while the real things ~ the animals~ have gone into the background.

What is killing the cattle fair is the people’s shift towards technology for farm production. Previously, farming community which abounds in “agriculturist” Bihar would drop in hordes to buy oxen of their choice as they were simply dependent on cattle for ploughing their farm lands or even thrashing the grains s but the technological revolutions coupled with the increasing establishment cost have made the farmers switch over to tractors for tilling.

Farmers say today a pair of bulls now cost a minimum of Rs 40,000—too high for a poor farmer settled in rural areas. The cost gets multiplied further given the fact that they have to take care of their animals all through the year after the tilling of land is over in days whereas a tilling tractor cost a maximum of Rs 2.30 lakh. Moreover, they can even make money while renting it out to the farmers during the tilling and harvesting seasons.

The period of the inception of this fair is not known accurately but everyone agrees that its popularity was spread far and wide.

The importance of this fair is known from the fact that Chandragupta Maurya, the founder of the Maurya Empire who succeeded in conquering almost all of Indian subcontinent and is considered the first unifier of India as well as its first genuine emperor, used to buy elephants and horses from this fair, according to historians.

It is said originally, the venue of the fair was Hajipur and only the performance of the puja used to take place at the mythological Harihar Nath Temple, believed to have been originally built by Lord Rama on his way to the court of King Janak to win hands of Sita, but during the rule of Mogul emperor Aurangzeb, it was finally shifted to Sonepur where it still continues.