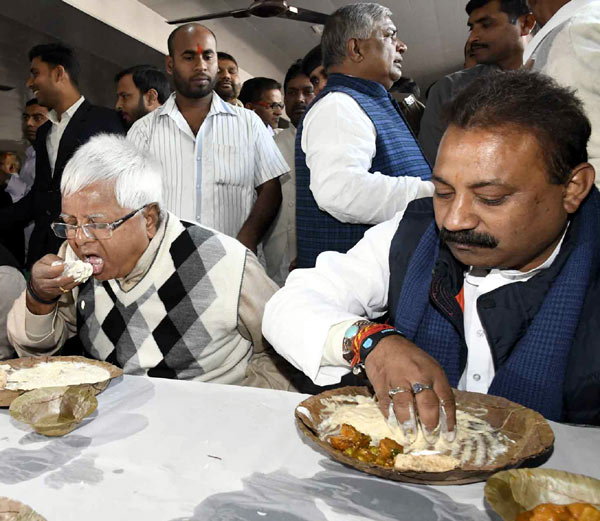 PATNA: The Congress has questioned the move of the JD-U to invite BJP people at its feast to be hosted tomorrow to mark Makar Sankranti.

Congress is an alliance partner of JD-U which heads the ruling Grand Alliance headed by chief minister Nitish Kumar. RJD is also a partner in the alliance.

“The JD-U people can better answer why they have invited the BJP at its feast this time,” wondered state Congress president Ashok Chaudhary.

Chaudhary who is an education minister in the government said he didn’t understand as to why the BJP people had been invited this time when they were kept ignored in the past two years.

The BJP, however, announced it would indeed attend the feast.

“We have been invited with respect and we will be attending then until it is canceled at their level,” announced senior BJP leader Sushil Kumar Modi.

On the other hand, the BJP people skipped the feast thrown by the RJD chief Lalu Prasad today.

However, scores of leaders turned up at the Patna residence of Prasad to enjoy feast on the occasion of Makar Sankrati—marking the transition of the sun into the zodiacal sign of Makra (Capricorn) on its celestial path.

On this occasion, the guests were served flattened rice with curd. Prasad and his wife Rabri Devi themselves serves food to some of the guests.

The RJD chief had arranged chura from Betia, curd from Vaisahli and Chapra and Tilkut from Gaya to serve the guests.

Today’s feast was only for the Hindu. Prasad will be throwing another such feast especially for the Muslims tomorrow.

Hollywood star Gere comes out in support of Tibetans, says they need love