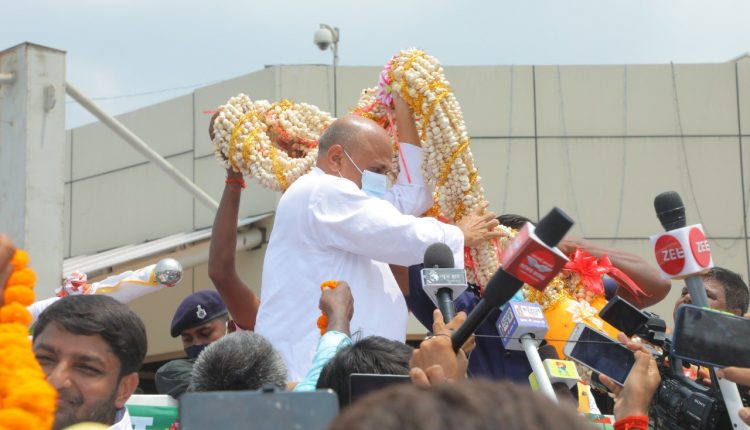 PATNA—The prevailing intra-party conflicts in the ruling Janata Dal United (JD-U) came out in the open today with top party leaders skipping the party function organized to accord grand welcome to former bureaucrat-turned-politician RCP Singh on his inclusion in the Union Cabinet. Singh who is more popular as RCP reached Patna for the first time after becoming the minister.

A clear hint of factionalism came to fore when neither the national JD-U president Rajiv Ranjan alias Lalan Singh nor party’s parliamentary board chairman Upendra Kushwaha attended the function. The photographs of Singh and Kuhwaha were also missing from the banners and posters put up along the main roads and at the airport in honour of RCP.

Kushwaha who merged his Rashtriya Lok Samata Party (RLSP) with the JD-U even left for Jehanabad to attend a programme saying he was neither communicated about RCP’s arrival in Patna nor extended invitation letter to attend the function.

“Factionalism was not going to help the party anymore. It will only damage the party prospects,” Kushwaha said, looking very anguished over the prevailing state of affairs in the party in the aftermath of RCP getting inducted into Modi cabinet.

He added the removal of party president’s photographs from the posters was not worth tolerating. On his absence from the function, Kushwaha said it was not mandatory for every party worker/leader to attend the party. “I have a pre-scheduled programme in Jehanabad and I am going there,” Kushwaha said.

Lalan Singh who only last month became the national chief of the party too stayed away from the function organized in the party office although he was present in Patna.

But RCP denied any dissension in the party saying the name of his party is “Janata Dal United” which says it all. He added there is only one leader in the JD-U and he is Bihar chief minister Nitish Kumar. The rest are only workers, he said.

Reports said the conflicts began in the party the moment RCP Singh took oath as a minister in the Modi cabinet last month while the JD-U was not in favour of him joining the Modi cabinet until it was given “fair representation”. Lalan Singh himself was in the race for the Union minister but missed the bus since the BJP allotted only one berth to its each ally.

Trouble increased further after pressures mounted on RCP to quit the post of JD-U’s national president on the ground of “One man, one post” while he wanted to continue on this post for the time being, JD-U sources said.

The opposition party took potshots at the JD-U over the continuing conflicts. “Kushwaha was not even invited to the party function although he happens to be party’s parliamentary board chairman. This amply explains how the conflicts have touched alarming level,” RJD spokesperson Mrintunjay Tiwari commented.

Another party leader said the JD-U would soon collapse like a pack of cards.

Schools under floodwater: After COVID-19, floods affect teaching of poor schoolchildren in Bihar