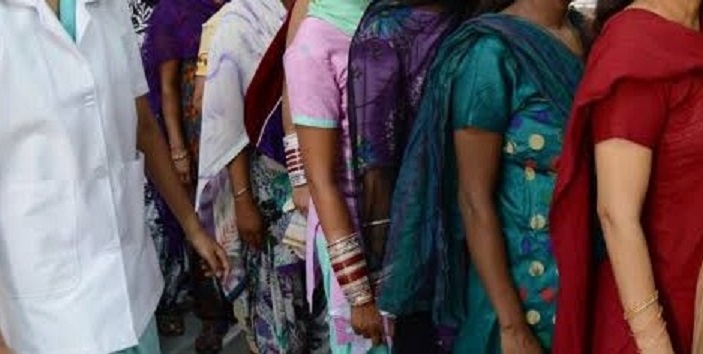 The hardships endured by rural women during pregnancy and childbirth tend to go unnoticed. Their husbands and in-laws rarely go out of their way to support them as they experience fatigue, illness and pain. Public services, too, are grossly deficient. A recent survey sheds light on this hidden ordeal.

In each state, the survey teams visited 10 to 12 randomly-selected anganwadis (spread over two blocks, in the same district) and interviewed as many as possible of the pregnant and nursing women registered at those anganwadis: 342 and 364 respondents, respectively.

The survey teams were shocked to find how little attention was paid, in the sample households, to the special needs of pregnancy – good food, extra rest and health care. Often, family members or even women themselves had little awareness of these special needs. For instance, 48% of pregnant women and 39% of nursing women in UP had no idea whether or not they had gained weight during pregnancy. Similarly, there was little awareness of the need for extra rest during and after pregnancy.

Poor diets lead to low weight gain during pregnancy. Compared with a norm of 13-18 kg for women with low BMI, the average weight gain in the sample was barely 7 kg (in UP, just 4 kg). Even these figures are likely to be overestimates, as they exclude women who did not know their weight gain at all. Some women were so light to start with that they weighed less than 40 kg at the end of their pregnancy.

Rest is another unmet need of pregnant women. Almost all the respondents had done household work regularly during their last pregnancy. A significant minority (21%) of nursing women said that no-one (not even a grown-up child) was available to help them with household work during pregnancy. Almost two thirds (63%) said that they had been working right until the day of delivery.

Due to lack of food and rest, most of the respondents had felt tired or exhausted during pregnancy. As many as 49% reported at least one symptom of weakness, such as swelling of feet (41%), impairment of daylight vision (17%) or convulsions (9%).

Pregnant and nursing women are acutely deprived of quality health care. Many of them receive some basic services (e.g. tetanus injections and iron tablets) at the local anganwadi or health centre, but they get very little beyond the basics. Small ailments easily become a major burden, in terms of pain or expenses or both. At the time of delivery, women are often sent to private hospitals when there are complications. A significant minority also report rude, hostile or even brutal treatment in the labour room. There is an urgent need for radical expansion of quality health care close to home. Two signs of hope here: high rates of institutional delivery and widespread use of public ambulance services.

Delivery as an Economic Contingency

Institutional deliveries are supposed to be available free of cost to all women in public health centres. In practice, the survey teams found that nursing women had spent close to Rs6,500, on average, on their last delivery. This amounts to more than a month’s wages for a casual labourer, in the survey areas. One third of these women’s households had to borrow or sell assets to meet the costs. The economic risks associated with pregnancy and delivery add to other arguments for universal maternity entitlements.

Under the National Food Security Act 2013 (NFSA), all pregnant women are entitled to maternity benefits of Rs6,000, unless they already receive benefits as formal-sector employees. The central government ignored this for more than three years, before launching the Pradhan Mantri Matru Vandana Yojana (PMMVY) in 2017. In flagrant violation of the Act, PMMVY restricts benefits to one child per woman – the “first living child”. Further, benefits have been arbitrarily reduced from ₹ 6,000 to ₹ 5,000 per child.

Even these meagre benefits are elusive. Among nursing women eligible for PMMVY, only 39% had received the first instalment. The government’s own data show that PMMVY covers less than one fourth of all births as things stand. (For further details, see Briefing Notes 2 and 3).

Against this gloomy picture, we observed a few signs of positive change:

In this survey, once again, Himachal Pradesh stood out as a state with relatively good public services including maternal care. Women in Himachal were also relatively well-off, well-educated and self-confident. Their predicament was much better than elsewhere, with, for instance, an average weight gain in pregnancy of more than 11 kg.

In Chhattisgarh and Odisha, we also found many signs of positive change, e.g. brightly painted anganwadis, breakfast for the kids, a pre-school education syllabus, collaboration between anganwadi and health workers, and eggs as THRs (in Odisha). Some of these initiatives are yet to make a difference, but there is a trend of improvement at least.

It is in Jharkhand, Madhya Pradesh and – especially – UP that the situation was absolutely dismal. In UP, all the anganwadis were closed at the time of the survey – allegedly because of the school holidays. Women and children disliked the “panjiri” (ready-to-eat mixture) being distributed as THR, if they ate it at all. No food was cooked at the anganwadi, even for children in the age group of 3-6 years. Pregnant women, left to their own devices, were struggling with the worst possible hardships and pains.

Untapped Potential of US $900m in Merchandise Exports from Bihar: Exim Bank Study