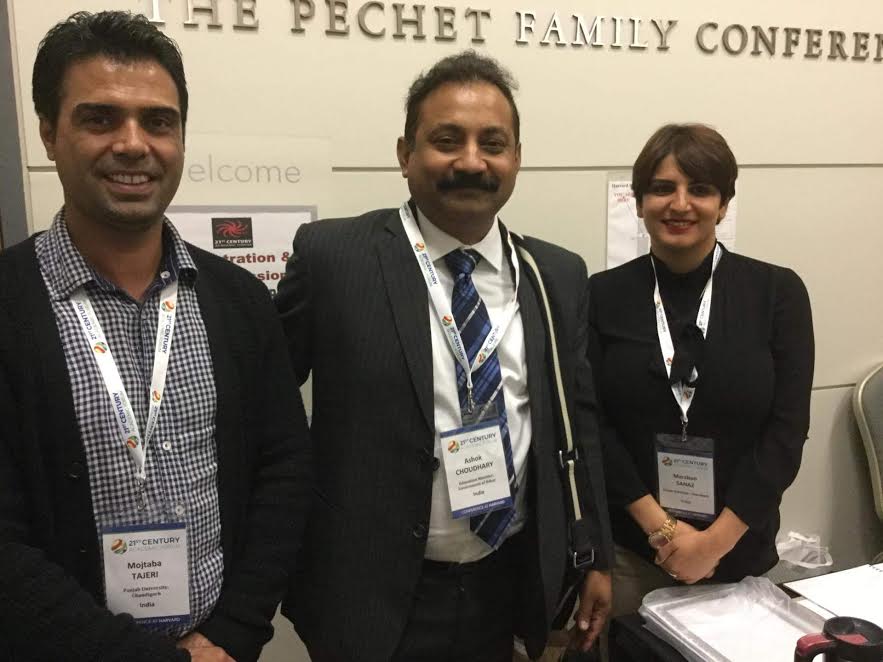 PATNA: Bihar education minister Ashok Choudhary today presented his Paper titled “The Dalit Averment in Bihar” at 21st Century Academic Forum Conference at Harvard, which is discussing the theme of “Challenge 2030: Envisioning the Future of Education”.

The Paper begins with the historical background and the origin of Dalits in India and underlines that many such tribes who carried on with their hunting-gathering lifestyles and resisted to get assimilated in the Brahmanical caste system were designated as untouchables and were forced to indulge in the lowest kind of menial works on large scale by the end of the Gupta dynasty.

The Paper is divided into four major sections which discuss the issues of Socio-economic condition of Dalits, Mahadalit Vikas Mission of the Bihar Government, Constitutional Provisions for Dalits and Violence against Dalits in recent times.

It notes that socio-economic condition of Dalits still remains pathetic despite so many efforts by the government.   Almost two thirds of Dalits in Bihar are poor and 71 percent of them are illiterate. Only 4 percent of them in the state could manage to study up to graduation and above level.

Even if they get a government job most of them are concentrated in fourth grade jobs. Some studies suggest that all most all safaikaramcharis or sanitation workers hail from Scheduled Castes and as many as 82.54% of them come from four communities of Dom, Mehtar, Basfor or Bhangi. This statistics clearly brings out the social biases persisting for ages in the society towards the Scheduled Castes.

According to the poverty estimates for 2011-12 prepared by the Planning Commission, Scheduled castes (42.3 per cent) suffer the highest level of poverty among all social groups in the rural areas. The Agricultural Census of 2005-06, indicated that the concentration of marginal holdings in Bihar is very high in the case of Scheduled Castes (95%). While the average land holding per household is around 1.13 acres, the same for Scheduled Castes is only 0.72 acres.

The concentration of families facing near absolute landlessness is highest amongst the Scheduled Castes (53.5%).  Despite limited ownership of land nearly 77.6 per cent SCs in Bihar are agriculture-workers and only 7.9% SC workers fall in the category of cultivators.

Nonetheless, several reports underscore the visible though inadequate improvement in the quality of life of Dalits due to the policies of affirmative action pursued in Bihar. For example we can say that the literacy rate of Scheduled Castes in Bihar has grown from 5.9% in 1961 to 28.5% in 2001. Similarly, female literacy among SCs has grown from in 0.92% in 1961 to 15.6% in 2001.

Education department has also undertaken some ambitious programme such as Akshar Anchal Yojna for Mahadalit students in 28,099 Dalit hamlets. Almost 19,379 Tolasevak and 8,720 Talimi Maraqaj have been appointed largely from Dalit esp. Musahara and Muslim communities, who ensure that 100% Dalit children between ages 6-14 are enrolled in the schools and attend it daily.

They are also trying to enhance the learning outcome of Dalit children and also make their mother literate. Another important intervention is Kasturba Gandhi Balika Vidyalaya Yojna, where every 534 blocks has been given one residential school of 6th to 8th classes for Dalit girl child. This has proved to be one of the most successful programmes of Dalit upliftment initiated by the Congress lead UPA government.

It notes that only State action is not sufficient. People at large have to change their mind set towards Dalit in general and Dalit empowerment through affirmative action in particular. It requests everyone to remember what Ambedkar said: “Reservation is neither a policy matter, nor a political gimmick, nor a matter of Charity. It is a constitutional obligation.”

After India, three more countries pull out of SAARC summit in Islamabad