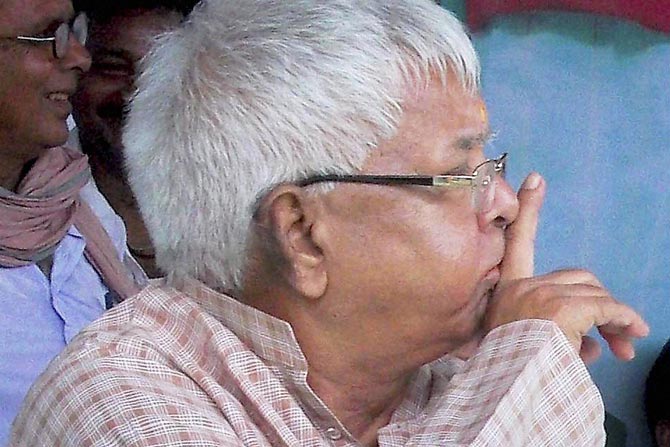 At a time when every politician is speaking something—either praising the Indian Army for its daring surgical strike in PoK or seeking proof of it— Prasad sits silently in his home.

Although none from the RJD would officially confirm the reason behind it, it is said Prasad is quite “displeased and distressed” over chief minister Nitish Kumar’s move to move the Supreme Court to cancel the bails of his two close confidants—Mohammad Shahabuddin and Raj Ballabh Yadav.

Both come from the communities which form the core base of his party’s most trusted Muslims-Yadav (M-Y) equation. This is the fear before Prasad, it is said.

Prasad looks just helpless at the moment. If he withdraws his party support, he will be blamed for backing “criminal elements”, if he doesn’t his M-Y equation will be under threat.

It’s this dilemma which has left him helplessly watching his “trusted” men being pushed behind the bars by the Nitish Kumar government where his RJD is a major coalition partner.

That is not the lobe worry for him. His “helplessness” in helping his trusted men from his own government is slowly creating an image of Prasad being a man who cares for only his children.

Both his sons Tej Pratap Yadav and Tejashwi Yadav are currently ministers in the NItish Kumar government.

His “passive attitude” is slowly building angers among his vote-bank from where he draws power.

This was amply reflected on Monday when a huge crowd took to streets and protested against the jailing of Shahabuddin in Siwan, thanks to the intervention of the state government.

“If he doesn’t react, his vote-bank will very soon crumble due to Nitish Kumar’s politics and Laluji will be left with nothing,” commented a senior RJD leader wishing not to be quoted.

Prasad is further said to be shocked over reports that the government did not consult him before moving the apex court in both the cases concerning Shahabuddin and Yadav.

Shahabuddin was pushed back to jail barely 20 days after he was granted bail by the lower court while incarceration also stares Raj Ballabh as here again, the state government has moved the apex court, challenging latter bail.

As per reports, the chief minister has gone on cracking down against the RJD people on the ground of “law and order” being his USP but this has only puzzled the RJD.

The current development has widened the gap between the two leaders, and according to unconfirmed reports, both the leaders have not spoken for long.