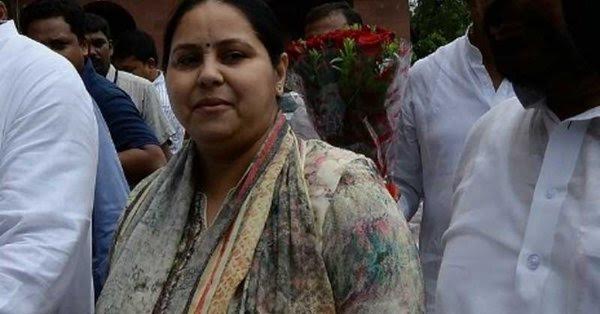 A day after the CBI conducted raids at around dozen location of Prasad, the Enforcement Directorate (ED) sleuths today carried out searches at the Delhi’s farm houses of his daughter Misa Bharti.

Bharti who is the eldest daughter of the RJD president is a Rajya Sabha member.

Reports quoting local media said the searches were on at three farm houses of Bharti located in Ghitorni, Bijwasan and Sainik Farms areas of Delhi in connection with a money laundering case being probed by the agency.

On Friday, the CBI had carried out raids at around dozen location of the RJD chief across the country including his Patna residence, bringing more trouble to the Yadav family.

The raids were conducted in connection with the gross irregularities in awarding tenders for hotel maintenances while Prasad was the railway minister.

The RJD president was not present at home and had gone to Ranchi to appear in a fodder scam case when the raids were carried out.

The CBI has already registered a case against the RJD chief Prasad, wife Rabri Devi and their deputy chief minister son Tajashwi Yadav in connection with the alleged irregularities.

‘Bihar govt had no prior information about CBI raid on Lalu’