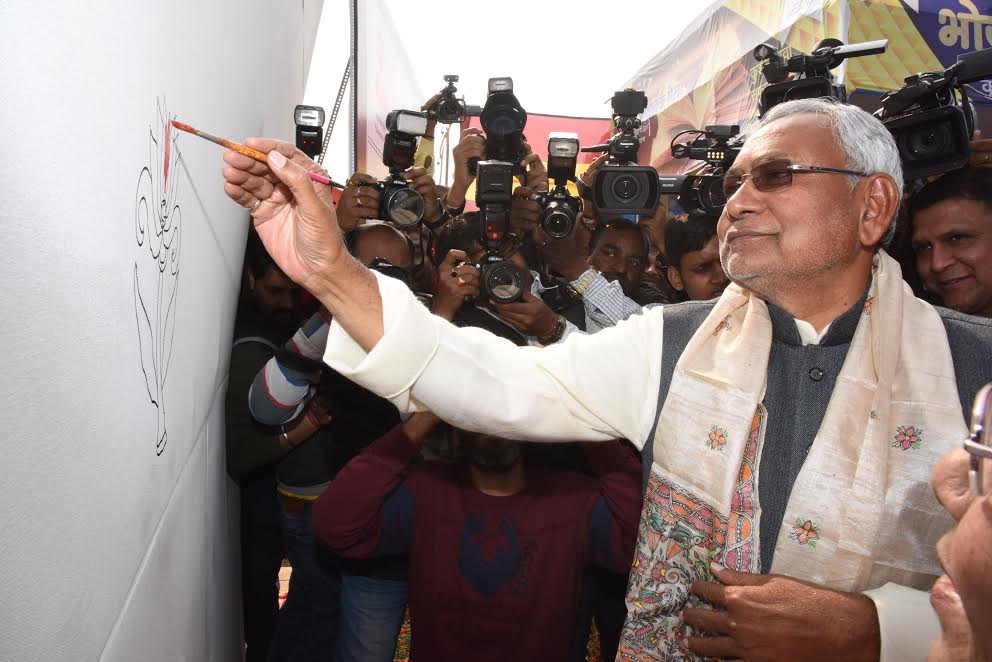 PATNA: The “Chanakya” of Bihar politics has got caught in a really tricky situation.

Even before his “Plan B” to return to the BJP camp takes formal shape, a protest of sort has erupted in the party over Bihar chief minister Nitish Kumar’s reported move to join the saffron group.

The chief minister had earlier surprised the BJP leadership when he, in a sudden move, announced his party support to NDA’s presidential candidate Ram Nath Kovind whom RJD has describes as a “hardcore RSS man”.

“The three-party grand alliance is set to crumble under the weight of its own contradictions but it will indeed be a blunder if the BJP tries to form a government with the support of Nitish Kumar,” warned senior BJP leader and party MP from Buxur, Ashwini Kumar Choube today.

ALSO READ: Five reasons why Nitish joining the BJP camp may not be a good idea

“It was he (Nitish Kumar) who had broken 17-year-old alliance with the BJP and publicly opposed Narendra Modi. In such a situation if the BJP joins hands with this man then this could prove suicidal for the party,” he added.

He is not alone. Most of the BJP leaders are totally against the return of the chief minister to the saffron camp angry at the way he shabbily treated BJP, has allegedly misused the people’s mandate and formed his government with the support of the opposition parties after breaking alliance with the BJP although they want to see him split the ruling Bihar alliance.

“How can we justify Nitish Kumar’s entry to the NDA especially when our Prime Minister questioned about his DNA in the last assembly polls and he in turn advocated for making ‘Sangh-mukt Bharat’? asked a BJP leader wishing not to be named.

According to him, the BJP is bound to sink if it restores friendship with the JD-U. “The general thinking is that the man (Nitish Kumar) is not reliable and has been misusing the people’s mandate quite frequently. He dumped us after winning the 2010 assembly polls with our support and now he looks ready to desert the RJD and the Congress with which whose support it was able to save its existence. He can’t be trusted anymore,” he added.

The reason why the chief minister appears in a hurry to come out of the ruling Bihar alliance and return to the NDA camp, reports say, is the way BJP has “neutralized” the minority factor and has been scripting its victory.

The BJP was able to make spectacular performances twice in Uttar Pradesh in a gap of three years—first time during 2014 LS polls and recently in the February-March 2017 assembly polls, despite the dominant presence of minority votes in India’s most populous state.

“Perhaps, Nitish Kumar has got apprehensive of his fate and sees the minority votes are of very little importance as of now to win elections. If the BJP can win elections in UP despite the presence of 20-30 percent Muslim votes, it’s even easier for it to succeed in Bihar having roughly about only 15 percent minority votes. This could be the thinking of the chief minister,” remarked a political expert.

The resurfacing of corruption cases against his ally, RJD chief and his entire family, further may have prompted him to plan for deserting his present partners and look for rather greener pastures in the BJP.

The RJD, however, says they are happy with following its ideology. “Sticking to ideology is more important than thinking about victory,” RJD leader and deputy chief minister Tejashwi Yadav has already said.

The JD-U has, of late, constantly attacking both the RJD and the Congress, amply indicating it has charted out its own course of action and does not want to stay in their company anymore.

This became clearer on Tuesday when party’s national spokesperson KC Tyagi remarked, “We were better comfortable with the BJP-led alliance”.

PM Modi rides a bi-cycle in Netherlands, thanks Dutch counterpart

No rift in Bihar grand alliance, it will last till 2025: JD-U