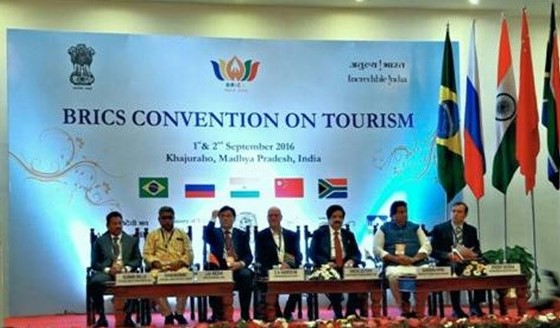 The two-day BRICS Convention on Tourism began at Khajuraho in Madhya Pradesh today.

The BRICS nations were represented by the Minister of Tourism, South Africa DA Hanekom and delegations from Russia and China.

Secretary (Tourism), Government of India Vinod Zutshi welcomed all the delegates, senior dignitaries, officials and members of the travel trade.

He stressed about the importance of the tourism sector as a major catalyst for economic growth and a source of job creation, thus contributing to the economy.

He welcomed the cooperation extended by all the BRICS nations for mutual growth of tourism between the member countries.

The Minister of Tourism, South Africa expressed his great pleasure for holding the BRICS Convention on Tourism in the historic temple town of Khajuraho and highlighted that India with a long tradition, history, ancient civilization and culture with a large number of World Heritage Sites like Khajuraho is a destination to be visited again and again.

He also proposed for constituting a permanent BRICS Working Stream on Tourism comprising the stakeholders of the Government and private sector.

Heads of the delegation of China and Russia also emphasized greater cooperation among the member countries for the mutual benefit for the growth of tourism and looked at the convention as a platform to interact with the travel industry partners.

Modi govt not cooperating us in flood relief works: Lalu