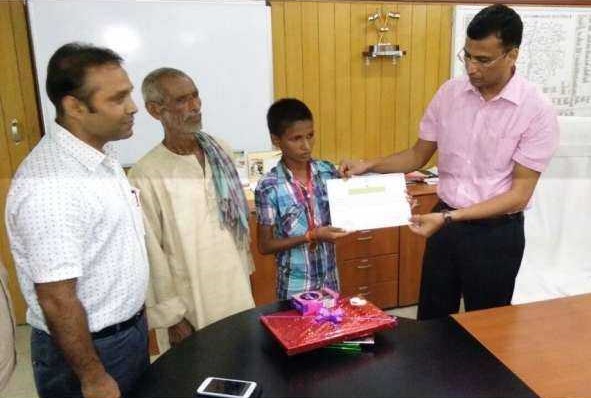 PATNA: A 10-year-old schoolboy who saved four girls from being drowned into a flooded river has been honoured by a top official in Bihar for his brave act.

Schoolboy Vipul Kumar was hounoured by the Jehanabad district magistrate Manoj Kumar on Tuesday. Vipul was given a bravery medal and citation letter for his acts bravery.

“He has done us proud through his brave act. The entire Jehanabad is proud of him. I will recommend his name for national bravery award,” the DM announced while handing him bravery medal in his office yesterday.

The boy had come with his grandfather Ram Narayan Yadav to the DM office.

The DM also asked the local block development office to arrange for Vipul’s studies. He wants to become a SP (superintendent of police) and serve the nation.

Reports said all the girls were returning homes after school when their feet slipped and they fell into the river.

Seeing them getting washed away by the fast current of the river, the brave boy identified as Vipul Kumar jumped into the river and saved life of four girls out of six.

Image Caption: Schoolboy being honoured by DM for his brave act.