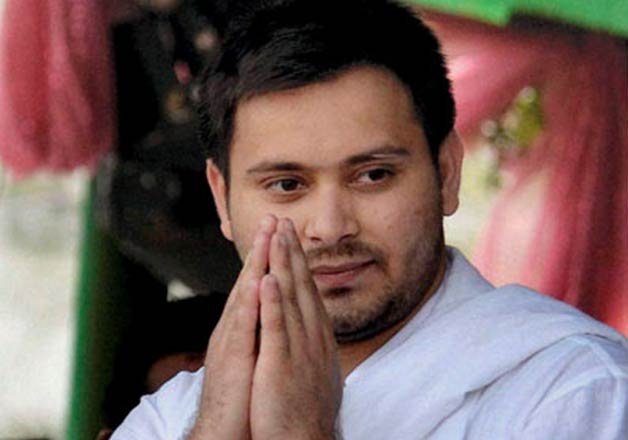 PATNA: Bihar on Friday saw the “birth ” of a new leader.

A rookie who used to be reticent in the House, RJD leader Tejashwi Yadav yesterday tore into NDA chief minister Nitish Kumar in his new avatar as the Bihar Opposition leader.

Although the Nitish Kumar government won the trust vote in the assembly, Tejahswi just left everyone impressed with his speech and the issues he raised.

Tejashwi, younger son of RJD president Lalu Prasad, was the deputy chief minister in the previous Grand Alliance government which Nitish Kumar headed before crossing into the NDA camp on Wednesday.

He questioned the chief minister’s move to join hands with Prime Minister Narendra Modi who questioned his DNA in public, his big talks on “Sangh-mukt Bharat”, ridiculed his take on corruption and also reminded him how his party saved his “izzat” (prestige) when his future was at stake after disastrous performance in 2014 Lok Sabha polls.

His barbs left the chief minister speechless even as the entire House heard him with pin-drop silence—something which was rarely seen in Bihar assembly in the past.

“The PM had questioned your DNA and you termed it as insult of 11crore Biharis. How did you then join hands with him?” asked Tejashwi, speaking against the confidence vote in the Bihar assembly on Friday.

Then, his mocked CM’s talks of Sangh-mukt Bharat(RSS-free India) and described him as a“Ranchhod” (those who flees the battlefield) leader.

He also ridiculed chief minister’s claim of corruption saying the latter had entered into the alliance with the RJD despite knowing the fact that his father Lalu Prasad was facing corruption charges in fodder scam.

Tejashwi further trashed JD-U’s allegations that the RJD chief had got blinded by love for his sons.

“Putra moh rahata to Nitish Kumarji aap CM nahin banate. Putra-moh nahin, bhai moh mein tuta gathbandhan (Had this been the case of love for son, he would have become the chief minister, and not  Nitish Kumar. The alliance got broken owing to Lalu Prasad’s love for his brother),” Tejashwi said, obliquely referring to Nitish Kumar. The RJD chief loves to call Mr Kumar as “Chhote Bhai” (younger brother).

The fiery Tejashwi also blamed the chief minister for frequently bringing down his own governments for four times in past four years in his bid to “polish” his image.

“Four precious years got wasted in forming four governments at frequent intervals which baldy hampered the progress of the state,” he said and asked why he did it too often when he ultimately had to go into the company of the BJP.

“This drama is beyond our comprehension. What kind of ideology, ethics are they? People want to know,” he said.

He also termed the chief minister’s move of celebrating 100 years of Champaran satyagraha as a big “hypocrisy”.

“On the one hand you are observing Chamaparan centenary celebrations, on the other you shook hands with the killers of Mahatma Gandhi. You have transformed yourself from ‘Hey Ram’ to Jai Shri Ram,” he thundered.

He accused him of “ditching” the people of Bihar saying the masses would teach him a lesson in the coming elections.
The former deputy chief minister also charged his previous boss with insulting the mandate which was handed to the Grand Alliance, doing all the maneuvering to walk into the company of the BJP and then taking the oath despite facing a murder case against him.

“You didn’t dare to dismiss me.Himmat thi to barkhast karate,” he asked and also cautioned the BJP against the man who not only broke 17-year-old alliance with the saffron party in 2013 but also dismissed all the BJP ministers.

He asked some 46 questions from the chief minister but the latter concluded his speech in shirt saying he would reply them at the “opportune” moment.