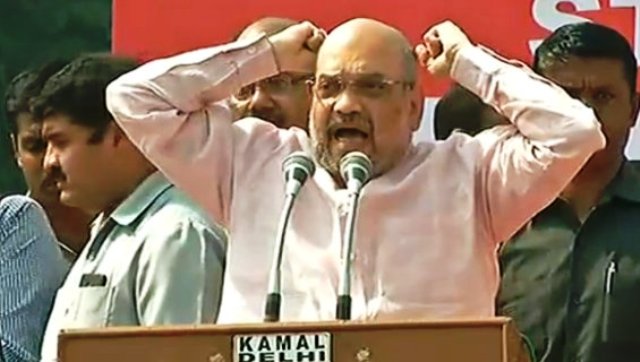 New Delhi: The ruling Bharatiya Janata Party (BJP) president Amit Shah on Sunday said his party would fight the brutalities of the Left without resorting to violence as he addressed a rally in the national capital extending his Kerala programme to New Delhi.

He came midway from his engagement in Kerala where there is an ongoing violence between the communists and the right wing forces.

Shah slammed the human rights activists who remain silent to the brutal killings of saffron men in Kerala questioning their stand on violence.

“Communist Party should be ashamed, most murders took place in Kerala CM’s area,” he said.

“Bodies of our workers were chopped to pieces to instill fear, even then we aren’t scared of sacrifice,” he said.

He asked where the rights groups were when 12 BJP workers were killed in Kerala.

Shah on Oct 3 inaugurated his party’s Janaraksha Yatra in Payyannur against Leftist violence. The Yatra (march) will end at the state capital Thiruvananthapuram on Oct 17.  He extended the same to New Delhi as well.

Shah in Delhi said there was no candle march for the slain BJP workers by any rights groups adding that the BJP would always challenge the Left wherever they are.

“We will not resort to violence but begin a Satyagraha,” he said.