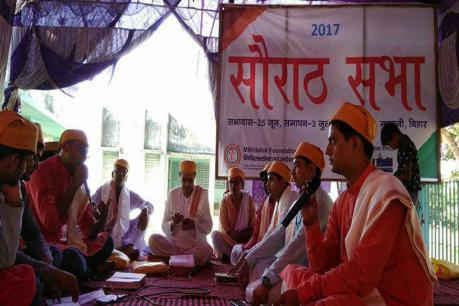 PATNA: The curtain on the nine-day Saurath Sabha, the annual assembly of grooms held every year in Madhubani district, finally fell today.

The Sabha which had began on June 25 this year remained special in many ways. According to organizers, a large number of people thronged the congregation on each of the day during the nine-day event.

In what can be described as staving off the dwindling participation in recent years, thousands of people comprising parents and guardians of prospective brides and grooms congregated at the event.

People who came from far off places—quite a significant numbers were Maithil Diasporas living in Canada, the US, the UK, Bangladesh and other countries—verily enjoyed programmes like Kavi Gosthi(poets’ gathering and their poetry recitation), song and musical events on each day of the event.

According to reports, more than a hundred marriage negotiations were deliberated; some of these turned into marriage settlement; others will wait for the next marriage session that starts in auspicious days as mandated in panji system to enter into arrangement of solemnizing their daughters/sons marriage.

Mithilalok Foundation, a registered trust, established a few years back to advancing the larger cause of Mithila, conceptualized the idea of making this year’s Saurath Sabha spectacular and visitor-friendly. The Foundation’s dedicated volunteers made it sure that event concluded on a high note.

He also advocated the idea of digitization of Panji (genealogical records) system.

The Foundation also organized Shashtrartha on 5th day of the event at the same venue where several scholars of Mithila participated in serious discussion.

The tradition of Shashtratha which once took place in 8th century between Shankaracharya and Mandan Mishra was replicated this year.  The topic of the Shashtratha was Saurath Sabha and its Relevance in Marriage Today.

In order to encourage Maithils to attend Saurath Sabha this year, the Foundation also launched a song titled Pritam lene chalu hamro Saurath Sabha yau (O beloved! Please accompany me too in Saurath Sabha) which became quite popular in the region.

“For the creation and further evolution of mankind, the institution of marriage as done in Mithila must be strengthened. Saurath has lots to offer to the world as it symbolizes the eternal and imperishable nature of marriage which rarely ends in collapse or divorce among the married couple,” said Dr Birbal jha said.

Stating that the idealism of Saurath Sabha needs to be imbibed by rest of the world, Dr Jha said described Mithila as a philosophy that teaches the world “how to remain content in the shadow of scarcity and miseries and still derive happiness and harmony”.