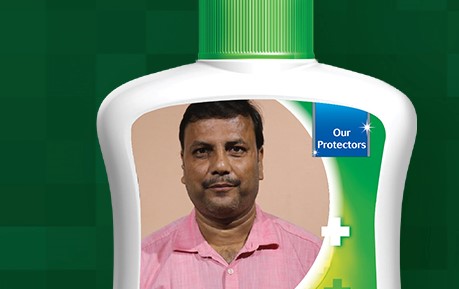 PATNA—A man from Bihar, who is credited with arranging the funerals of around 250 COVID-19 victims, is among 100 people from across India chosen to feature on Dettol products as a “protector”.

Dettol, India’s most trusted germ protection brand, has for the first time in history has replaced its iconic logo with an image of 49-year-old philanthropist Mukesh Hissarya along with his inspiring story as a tribute to the COVID-19 warrior who selflessly helped numerous people at the time of crisis. Mukesh’s photo now appears on Dettol pouches and bottles with his description of his service in brief.

“Mukesh, from Patna, risks his life to perform funerals for many who had fallen, sometimes even when the families would not attend,” reads the message printed in bold letter on Dettol bottles with his photograph.

Dettol claims to have curated 100 such stories from across India and carried them on liquid handwash packs in honour of the COVID-19 warriors saying such stories will create a sense of hope and confidence among the people.

“We believe these stories when shared give a sense of much-needed optimism among those seeing them. Therefore, as a brand, we have for the first time in Dettol’s history given up our logo to share their actions. As the packs carry these stories, we believe they will also carry a message of hope across our country,” company’s regional marketing director, South Asia, Dilen Gandhi has told the media.

Mukesh turned to helping the victim families cremate bodies of their near and dear ones after the relatives and neighbours disowned them in crisis fearing they themselves might land in trouble if they rushed to either console them or join their funeral processions.

How it all started

“In April last year, I got a call from an acquaintance who sought my help for cremating his father. Although he had died of a heart attack, no neighbours or relatives reached him to pick his body and carry it to the local crematorium. I rushed to the spot and arranged for some labourers to cremate his body. Thus, began my service for humanity in crisis,” Mukesh said.

According to him, many families didn’t come out of their homes for funerals, fearing of getting infected. “Some 15-20 per cent of people were those who handed out the bodies and quickly went inside their homes as our team arranged their funerals,” he revealed, adding 90 per cent of people cremated by his team were COVID-19 victims. There are 300 members in his team who donate money for such works. He said his team had hired labourers, priests and barbers who are paid for fulfilling their respective duties at the crematoriums.

But doing this was not very easy for Mukesh who faced a lot of pressure from his family to stay away from such services. “This task was very challenging for me since I always faced a lot of pressure from my family who would ask me to return home soon,” he said. According to him, he travelled by his scooty always dressed in PPE kit which he would discard at the cremation centre before leaving for home.

“I get a lot of pleasure in helping the people in crisis,” Mukesh summed up.