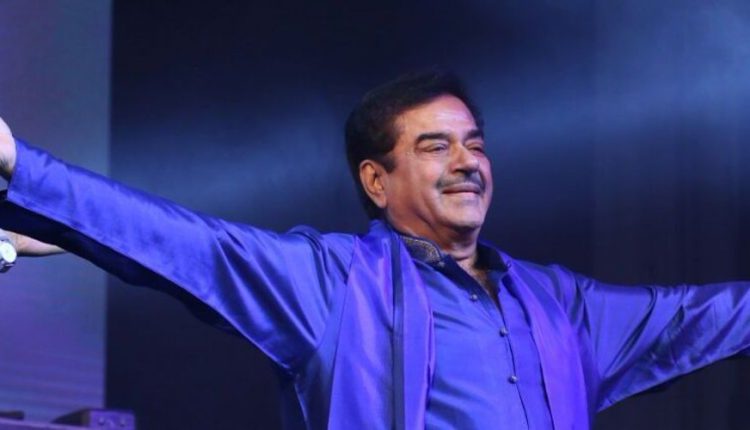 PATNA–Actor-turned-politician Shatrughan Sinha has earned a new sobriquet post his impressive win in by-elections to Asansol LS seat in Bengal—From all-time famous “Bihari Babu”, he is now being addressed as “Babu Moshai”! Sinha who contested the elections on Trinamool Congress ticket got the much-needed victory after a series of defeats he and his family faced in recent elections.

The term “Babu Moshai” had become famous after film star Rajesh Khanna in one of his Bollywood’s classics “Anand” addresses Amitabh Bachchan, who plays the role of a physician in the movie, as “Babu Moshai”.

t’s also a coincidence that Sinha began his political career by contesting against Rajesh Khanna from New Delhi seat in 1991 although he lost. This sowed the seed of hostility between the two stars which never become normal.

Battling hard for his political survival after his humiliating defeat from Patna Sahib seat in the last LS polls, Sinha badly needed a victory to stay himself afloat. The desperation grew further when he virtually found himself ignored by the Congress party he had joined as he was hardly invited for any party programmes.

It was in this background that Mamata Banerjee’s offer to join the Trinamool Congress came as a ray of hope for Sinha. And, finally when he was announced the TMC candidate for the Asansol by-polls, he showed no complacency this time—literally camping in the consistency and launching intensive poll campaigns, often switching between Hindi and broken Bengali. Eventually, he had the last laugh!

Prior to that, Sinha had fielded his wife Poonam Sinha against Defence Minister Rajnath Singh from Lucknow LS seat in 2019 polls. She contested on Samajwadi Party (SP) ticket but lost badly, polling just 25.59 percent votes.

In the last 2020 Bihar assembly polls, Sinha then fielded his son Luv Sinha from Bankipur seat in Patna on Congress ticket but he too lost to his BJP rival. Given this background, the victory in Asansol polls has come as a major relief for the actor.

“My most sincere thanks to the wonderful people of Asansol for their massive expression of support to me. I am overwhelmed and also humbled by the love and affection showered on me by the lovely people of Asansol, Bengal,” Sinha tweeted after his victory. He also profusely thanked TMC chief Banerjee for reposing her faith in him.

Sinha’s relations with the BJP soured after he was not included into the Narendra Modi cabinet when the BJP won the 2014 LS polls with historic mandate, analysts say.

In days to come, Sinha went on publicly criticizing the party leadership for “sidelining” his mentor LK Advani and Murli Manohar Joshi and the overall situation reached to such a level that he was not given party ticket for the Patna Sahib seat, his home constituency, in 2019 LS polls.

He promptly got the Congress membership and joined the poll fray but lost to fellow caste man and former BJP friend Prasad.