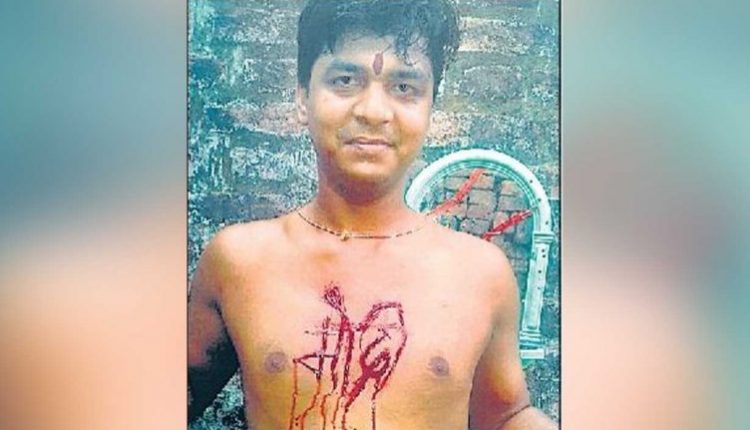 PATNA: Fascination for Prime Minister Narendra Modi has now turned into sheer madness, so it seems.

In a bizarre incident, a man in Bihar scribbled Modi on his chest with knife out of extreme joy shortly after the Bhatrtiya Janata Party (BJP) attained absolute majority in the Lok Sabha during the counting of votes on Thursday and it became clear Modi is returning as PM again.

Sonu Patel, a resident of Turkaulia village in east Champaran district who runs fried grain shop couldn’t control himself after he saw the BJP tally crossing 300 mark on his TV screen.

The first thing he did was to distribute sweets among the villager but he found it not enough to celebrate the occasion.

Soon he picked up knife in his hand and the scratched ‘Modi’ on his chest as blood oozed from the body. Instead of screaming, however, he wore a smile of satisfaction on his face.

“PM Modi is the future of India. If he is always ready to protect the nation from enemy, we too can offer any sacrifice for him,” Patel told the media on Friday.

In the elections, the BJP-led NDA won 353 seats in the Parliament while the Congress won 52 seats. In the last 2014 Lok Sabha polls, the BJP had won 282 seats.

Rapist marries victim in Jharkhand to…