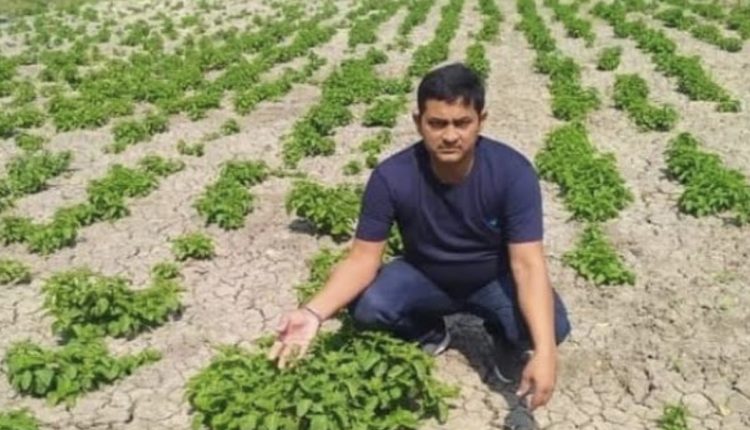 This photograph was tweeted by IAS officer Supriya Sahu
475
Share

PATNA—A much-touted claim by a farmer from Bihar that he has grown world’s costliest vegetable in his farmland has turned out to be a fake story.

Amaresh Singh, a young farmer who hails from Karamdih village under Nabinagar block in Aurangabad district, had earlier claimed he has cultivated hop shoots which costs RsOne lakh a kilogram.

A spot verification by a local media, however, found that no such plantation has been started by the farmer in Aurangabad district.

Initially he told the media that 60 percent of the plantation was successful but on being confronted by the media he said most of the plants have withered away as his partner didn’t take care of them when he fell sick.

Assistant director, horticulture in Aurangabad, Jitendra Kumar told the local media that his team didn’t locate any field with hop shoots plantation during spot verification. The team searched for his farmland after the news made waves in social media.

“We will act against this man if it turns out to be the issue of fake farming,” Kumar told the media.

Aurangabad district magistrate Saurabh Jorawal too denied farming of any such vegetable in the district.

“Some officials from Patna had inquired about plantation of hop shoots but no such cultivation has been found here,” the district magistrate told a local media.

“We are awaiting direction from the senior officials (to act in this regard),” he added.

Local villagers also expressed ignorance about any such farming in their areas when a team of local media persons rushed to Amaresh’s village to see the plantation.

Hop shoots are perennial plants primarily grown in North America and Europe. They are used for “bittering, flavoring and also as a stability agent in beer”, according o reports.

The whole story went viral on social media after an IAS officer tweeted about hop shoots farming by this young man from Bihar.