The shocking incident took place in Madhepura district on Saturday 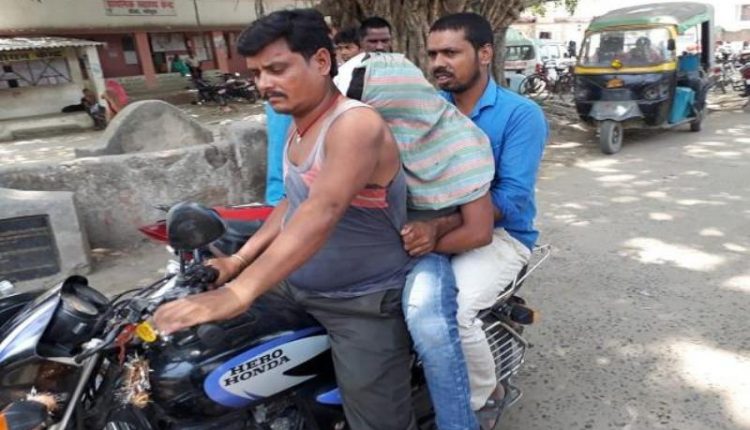 Man carrying son's body (in the middle) on a bike in Madhepur district of Bihar IMAGE COURTEYS: PRABHATKHABAR.COM
423
Share

PATNA: A poor villager in Bihar carried the body of his son on a bike as the hospital authorities refused to provide him ambulance despite his repeated requests and emotional appeals for help.

The shocking incident relates to a primary health centre located at Chausa block in Madehpura district.

According to reports in the local media, Shaym Shah, a resident of Chausa East panchayat, had admitted his 15-year-old son to a private clinic after he fell ill on Saturday.

As his condition deteriorated, he was subsequently rushed to the local government primary health centre where the doctors described him brought dead.

After his death, the grieving family requested the hospital administration to provide him ambulance or any vehicle to carry the son’s body home but the latter showed no interests.

According to victim family, initially the hospital authorities said there was no driver available right now but when the family arranged for the driver, the administrated gave another excuses.

Left with no option, the grieving family came to the main road and waited for vehicles for help but they ignored too.

Eventually, a local villager showed mercy on him and offered help. It was then that the body was put in the middle of the bike and carried home somehow.

“The hospital doesn’t have the vehicles for carrying bodies while the ambulances available for carrying patients are not allowed to transport dead bodies,” local civil surgeon Dr Shailesh Kumar told the local media on Sunday.