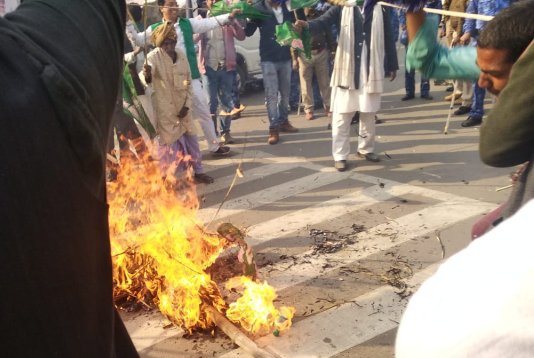 PATNA: The call for Bihar shutdown given by the Rashtriya Lok Samata Party (RLSP) headed by former Union minister Upendra Kushwaha evoked mixed response across the state on Monday after almost the entire opposition parties lend their full support.

The shutdown call was given after the RLSP chief Kushwaha, along with other party workers, was injured in police lathicharge during party’s protest march on Saturday seeking reforms in education system.

At many places across the state, vehicular traffic remained badly affected while the train services remained disrupted.

In Patna, the angry protesters carrying flags in their hands stood at the railway tracks at platform number One and disrupted the movement of trains.

At many places, the protesters burnt tyres and came out on the streets protesting against attacks on Kushwaha.

The shutdown has got a boost after the prominent opposition parties like the RJD, Congress, HAM, Left and VIP lent their full support to it.

Kushwaha was injured during the party’s protest rally in Patna on Saturday after the police baton-charged the protesters trying to move ahead to reach the Raj Bhawan.

The RLSP chief was hit on his head, back and hand as a result of which he sustained serious injuries and had to be admitted to the hospital. He is currently admitted to the PMCH.

Modi has gone mad after knowing he is not returning to power: Mamata Banerjee

Covid19: ‘People living in a state…