PATNA—When the Opposition parties sought for postponement of assembly elections in Bihar in August this year citing how this could prove disastrous for the state in view of corona pandemic, the ruling NDA mocked them.

They alleged the opposition parties were using Covid-19 as a “cover” to run away from the electoral battle after apprehending imminent defeats in the elections.

As things stand today, more than a dozen top BJP leaders—seven of them being party “star campaigners”— have suddenly found themselves out of the poll campaign after getting infected with Covid-19 as the electioneering heads towards decisive phase.

Incidentally, all these leaders figure among the list of 30 leaders declared by BJP as party’s “Star Campaigners”.  Many other BJP leaders such as party MP Vijay Manjhi and legislator Arun Kumar Sinha too have quarantined themselves after testing positive. 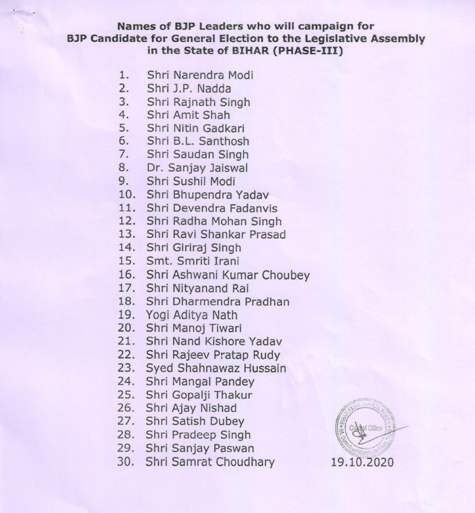 Mukesh Sahni, President of Vikashseel Insan party (VIP), a BJP ally, has also got out of the campaign after being infected with coranavirus while two NDA ministers, Binod Singh (BJP) and Kapildeo Kamat (JD-U) have already died from Covid-19.

As these leaders, quite many of them from Bihar, get out of poll campaign midway through the poll process, the responsibility of campaign has fallen on the shoulders of national leaders.

Especially Prime Minister has been investing much energy in Bihar elections this time again. He has already addressed as many as six election rallies and is scheduled to address another six rallies in the next three days.

After Modi, it’s Ravi Shankar Prasad, Nityanand Rai, both union ministers, UP chief minister Yogi Aditya Nath and party’s state in-charge Bhupender Yadav have been working hard to get support of the masses.

Report said it was after the ruling parties strongly batted for conducting elections on time that the Election Commission finally announced the dates of polling.

According to reports, the situation was well under control till the leaders focussed their attention on holding virtual rallies but the things spiralled out of control very soon as they began addressing actual rallies and ignoring the Covid-19 safety norms during the election campaigns.

Modi has nothing new to offer, continues with his attacks on Tejashwi, Jungle Raj, Rahul and Congress

Man sentenced to death for rape-murder…