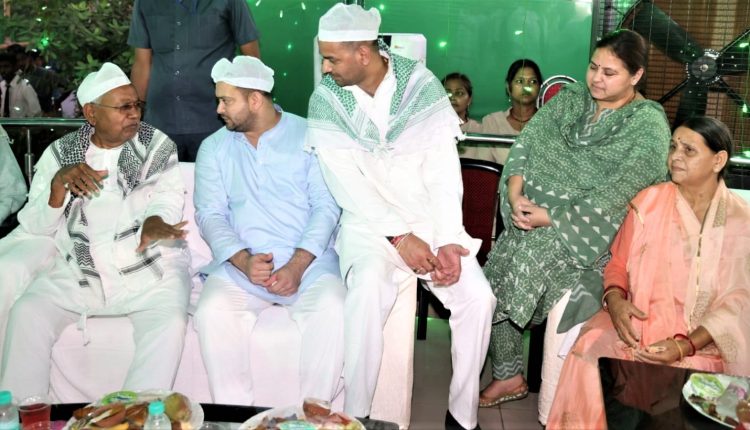 PATNA—In the last 10 days, three back to back Iftar parties in Patna have reduced the political distance between Chief Minister Nitish Kumar and the Leader of Opposition Tejashwi Yadav. Kumar has also been conversing with LJP (R) president Chirag Paswan.

Tejashwi Yadav and Chirag Paswan are the sons of Nitish Kumar’s old friends — Lalu Prasad and Late Ram Vilas Paswan. Nitish, an uncle for the sons, had moved away to make his own political destiny in the state.

The effect of the three meetings is reflecting on the statements of Tejashwi Yadav and Nitish Kumar. The former, instead of targeting Nitish Kumar directly — is now blaming the Narendra Modi government. Yadav is touching only on those issues where the ideology and stand of Nitish Kumar do not match with the saffron party.

At present, the use of loudspeakers for Azan or the uniform civil code is being debated in the country. While the BJP leaders are raising the issues vehemently, Tejashwi Yadav is almost complementing the statements of Nitish Kumar.

Nitish Kumar, on the issue of the loudspeaker ban in Bihar, said that it was a ridiculous talk if anyone is discussing or thinking about it. “It was not implemented in the past and will never be implemented in the future,” he said.

Tejashwi Yadav on Saturday said: “The loudspeaker was invented in 1920 and its use was started in 1970 in the country. What does it mean? Prayers were not taking place before 1970?” Tejashwi said.

“BJP leaders have an old habit to divert attention from the real issues. They are not talking about real issues like unemployment, price rise of fuel and commodities, education, health, crime, etc.,” Tejashwi said.

The political experts believe that Nitish Kumar is thinking of something in the context of JD(U)- BJP political relation in Bihar. But, no one knows what exactly is going on in the mind of Nitish Kumar.

RJD vice president Shivanand Tiwari said: “There is no tool to know what Nitish Kumar actually wants to do. Even his closest allies like Vijay Chaudhary or Lalan Singh do not know the next move of Nitish Kumar. He never shares his views with anyone. You cannot extract exact things from the stomach of Nitish Kumar.”

In the last 10 days, Nitish Kumar walked to the residence of former Chief Minister Rabri Devi for the Iftar party and on the next day he reached the Patna airport with a bouquet of flowers to receive Union Home Minister Amit Shah.

“I firmly believe that something had happened in the meeting between Nitish Kumar and Amit Shah. The body language of Nitish Kumar has changed more. It has reflected in the Iftar party of JD(U) in Haj Bhawan when Nitish Kumar walked with Tejashwi Yadav to his car to see off him and then sat in his own vehicle is a big thing in the politics of Bihar and it has a message for the Center as well,” Tiwari said.

During the Iftar party in the house of Jitan Ram Manjhi, Nitish Kumar signalled Chirag Paswan and the latter went to him and touched his feet. This happened for the second time at Rabri Devi’s residence also.

Nitish Kumar’s change in approach is surprising to everyone in Bihar. He has shown a healthy approach towards the sons of his two old friends and socialist leaders — Lalu Prasad and Late Ram Vilas Paswan, and many are reading much into this.