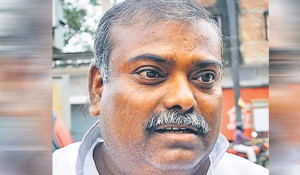 The Bihar police today attached the property of absconding Rashtriya Janata Dal (RJD) legislator Raj Ballabh Yadav accused of raping a Class 10 girl student at his residence earlier this month. The police confiscated his property and carried them away in the trucks a day after a local court allowed it to carry out the attachment procedures. The MLA has been on the run since February 9.

A huge police force reached the legislator’s Pathara-English village in Nawada district and carried out the attachment process as the co-villagers watched all these with interest. Reports said the police confiscated his property which included furniture sets, sofas, wardrobes, almirah, beds, utensils and lantern, his party symbol. The police team had come with the JCB machines and trucks to load the seized goods.

More than 150 policemen drawn from various police stations stood guard at the MLA’s residence as the labourers uprooted his doorframe before starting the attachment process. The police executed the attachment order after the absconder failed to surrender despite a formal proclamation order issued against him and was pasted on the walls of his house.

Police source said the attachment process would continue for the next few days as the lawmakers owns many buildings in Nawada, his home district, Patna and Gaya. Earlier the court had rejected his bail petition.

The fugitive legislator had earlier announced to surrender in the court but he suddenly deferred his plan. A couple of days back the police nabbed a woman Sulekha Devi who is alleged to have lured the girl on attending a birthday party and then supplied the victim to the lawmaker instead. However, his arrest failed to provide any clues about the locations of the fugitive lawmaker.

The police had detained lawmaker’s son Akhilesh Yadav who is accused of preventing the police search his father’s home and destroying the evidence but his quizzing too proved useless. Reports said the police are finding it hard to know about his whereabouts as the lawmaker is not using his cell phones and instead depending on his trusted messengers to pass information to those who matters.

Authorities stepped up pressures on the lawmaker after the chief minister Nitish Kumar took a very serious note of the incident and ordered the police to bring the case to a logical end. “Where can he (lawmaker) run and hide? He will be caught and brought to book, and face speedy trial,” remarked chief minister.

Reports said initially the police refused to entertain the case of the victim after finding a ruling party politician involved in the incident. They went after the lawmaker only after the senior police officials took cognizance of the case and ordered arrest of the accused after gathering some concrete evidence of his involvement in the rape.