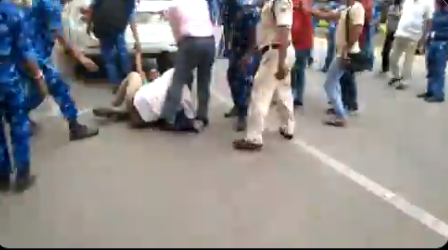 PATNA—Opposition lawmakers angrily protested inside the Bihar assembly and on the streets over the controversial Special Armed Police Bill, 2021.

The opposition is opposing the Bill as they say this bill empowers the police force to arrest people without a warrant.

The Bihar House witnessed repeated acrimonious scenes over the Bill on Tuesday, leading to frequent adjournments all through the day.

As their tricks appeared not working, the opposition members staged a sit-in just in front of assembly Speaker Vijay Kumar Sinha’s official chamber and literally held him captive.

Eventually, a heavy contingent of police force reached the assembly and got down to work, physically evicting legislators preventing the Speaker come out of his chamber, local media reported.

A group of female legislators who was found obstructing Speaker’s way to his Chair too were forcibly evicted with the use of police force.

On the other hand, RJD legislator and Bihar Opposition leader Tejashwi Yadav took out a protest march on the street to protest the Bill.

Protesters were treated with water cannons as they remained hell-bent on marching towards the Bihar assembly.