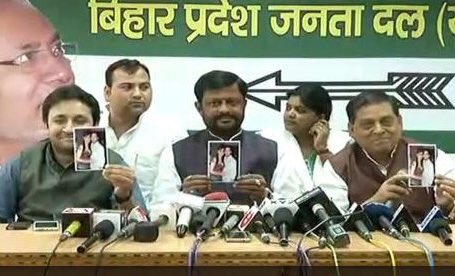 PATNA: It seems all is not well in the ruling National Democratic Alliance in Bihar headed by chief minister Nitish Kumar.

In another embarrassment to the BJP-JD-U combine, BJP MP Dr CP Thakur today came out in defence of RJD leader Tejashwi Yadav after the JD-U released a photograph of him with a lady.

“There is no harm if Tejashwi agreed for a selfie with a girl. It doesn’t mean someone has to start assassinating his character,” Thakur who also happens to be a renowned physician told the media in Muzaffarpur on Sunday. He also asked leaders to desist from such tactics.

The picture was released to the media on Friday in retaliation to RJD showcasing a selfie of liquor mafia Rakesh Singh with Chief Minister Nitish Kumar.

Strangely, BJP leader and deputy chief minister Sushil Kumar Modi too had supported the JD-U move while stating that such behaviour was not proper for a person who leads a public life.

Earlier Dr Thakur had hot out at the Nitish Kumar government for introducing reservation in contractual appointments saying that may lead to public resentment and drop in investments in due course.

“I think there was no need to introduce reservation in outsourced services. There is already scope for better implementation of the reservation system in sectors where the quota system is in place”, Thakur had told the media on Thursday.

According to him, the move could convey a wrong message outside the state and ultimately prompt the investors to hold their hands back in investing money in the state.

Thakur is of the opinion that instead of extending reservation to this sector, the government should have paid more attention to providing proper education to the socially backward classes.

“But, introducing reservations in a new sector may make a section of the society feel that the space available to it is shrinking. This may lead to public resentment that may become difficult to handle”, Thakur opined.