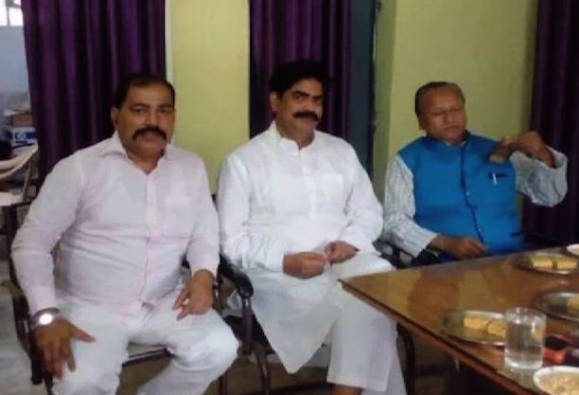 PATNA: The ruling Nitish Kumar government in Bihar landed itself in unseemly controversies on Tuesday when one of its ministers was caught on camera paying a visit to murder convict Mohammad Shahabudidn in jail and feasting with him in what opposition described as a clear violation of jail manual.

The minister in question Abdul Ghafoor who holds minority affairs portfolio reportedly met the jailed RJD leader on March 6, along with other party lawmaker.

The picture shows the minister sitting alongside Shahabuddin and enjoying sweets inside the jail. Shahabuddin who has more than three dozen criminal cases pending against him has been currently serving life term in a murder case.

“It was just two-three minutes courtesy meeting…I was in the (Siwan) circuit house and as the jail was nearby, I decided to meet Shahabudidn,” the minister told the media on Tuesday, defending his meeting with the jailed don serving life sentence in a murder case.

The RJD chief Lalu Prasad sought to downplay the issue, terming it a normal courtesy call. “What’s wrong with him? When we go to see someone in jail, we are treated with sweets as a good gesture,” he remarked.

The BJP reacted by saying it had exposed the “good governance” claim of the chief minister.

Shahabuddin who was once infamous as a “don of Siwan” has been in the prison since 2005. He represented his home Siwan Lok Sabha seat four times before getting arrested and sent to jail.