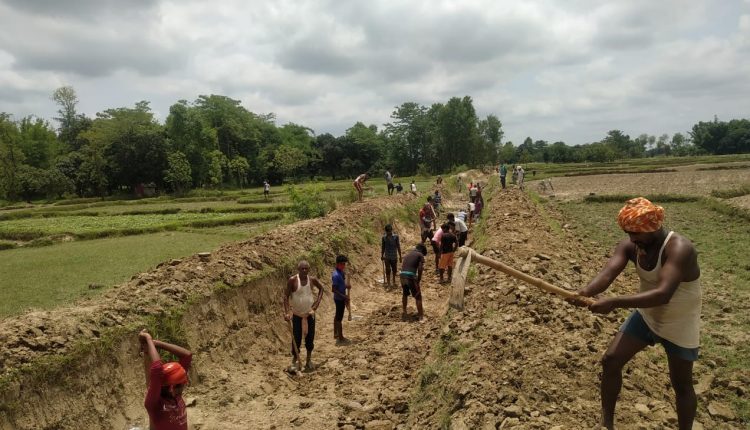 PATNA—Returning migrant workers have revived an old water body which had been lying dead for the past about 50 years. This has brought sudden happiness on the faces of farmers.

Some two kilo meter-long canal located in Benipatti block of Madhubani district once irrigated 300 to 400 acres of agricultural land but over the years it got filled with wastes and turned useless.

Recently when hundreds of migrant labourers returned to their villages, local mukhiya Pushpa Devi discussed the idea of reviving the canal with them. They happily agreed and the work started soon.

In the past one week since the renovation works started, labourers have removed the wastes and revived 75 percent of the canal through their hard work.

Around 200 workers have been working for the past one week which has infused new life into the dead canal. The canal connects Kosi river with local Jiwachh river.

“We are very happy to revive the dead canal. It will prove to be a boon for local farmers,” local mukhiya Pushpa Devi told the Bihar Post.

The new canal has been designed in such a way that the silt flowing with the water will automatically get accumulated in multiple holes dug out in the bottom of the canal leaving the water move smoothly.

The creation of holes will not only contain flow of silt but will also maintain water table in the areas.

The revival of this canal will help hundreds of villages to irrigate the agricultural land and reap rich harvests every year.

Covid-19: Mother refuses to open door for son after he straightway rushes home on return from Mumbai