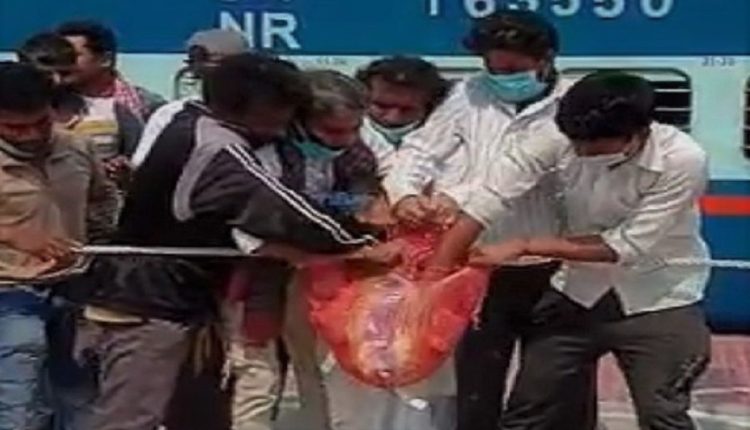 PATNA—This is the story about how hapless migrants returning to Bihar by Shramik Special trains have been battling hard for survival.

Case 1: Maqsood Alam accompanied with his wife and four-year-old son boards Shramik Special train at Delhi Station to reach his home in Bihar’s West Champaran district to attend Eid festival. Due to excessive heat and dehydration, the child falls sick. He desperately needs milk to feed his child as his condition keeps on deteriorating fast. As the train reaches Muzaffarpur station, he jumps out of it and goes out hunting for milk. By the time, he returns to the platform with a bottle of milk, his child had collapsed. His Eid had converted into “Muharram”. Maqsood worked as a painter and had sold off his petty belongings to reach his home.

Case 2:  Vishnu Prasad who sold clothes on the streets of Palghar in Maharashtra reaches Danpaur (Patna) station with his family by another Shramik Special train. The moment he settles on the platform to resume further journey by bus, his two-year-old daughter demands milk but he serves her a glass of water. He tell her not to seek milk lest Corona will “catch” her. The terrified girl doesn’t ask for milk. “Pl understand our helplessness. We are not able to fulfil even my child’s small demand for milk,” says Vishnu.

Hapless migrants returning homes with petty belongings have been simply left at the mercy of God. With the Shramik Special trains carrying migrant labourers normally taking circuitous routes to reach destinations and scarcity of food, water and other facilities in trains continues to be an issue of severe concerns, the desperate returnees have now started looting foods at the railway stations. Only on May 27, the famished migrants looted foods and water bottles at three places in Bihar, indicating the severity of the situation.

The first incident was reported from the Patliputra station in Patna when the migrant workers looted food packets and water bottles. Reports said the poor migrants who were not provided food and waters for hours during their long journey lost their patience as a special train remained stranded at the station for long. Angry passengers came out of the bogies and went after the food packets and mineral waters kept at the station. By the time the railway police came into action, the passengers had returned to their seats with all food stuffs.

Another such incident took place at the Samastipur railway station the same day. Reports said the thirsty labourers coming from Maharashtra asked the railway staffs to provide them water but they ignored their request. Within no time, crowds of migrants jumped out of the train and looted all the 1,500 bottles of Rail Neer kept at the platform. Many walked away with whole crate of water bottles. The Shramik Special coming from Lokmanya Tilak Terminal was going to Darbhanga.

Even more distressing scene was on display at the Bhagalpur railway station when the famished labourers tried to snatch food packets from co-passengers. Some 1,200 labourers had boarded the Shramik Special train at Jalandhar to reach Purnia but they faced severe food scarcity during travel.

They went on the rampage as they saw the food packets on the platform when the train reached the Bhagalpur station on Wednesday. Quite many labourers walked with many packets in hands while there were also many who didn’t get even a single one and hence they clashed with others to snatch food packets from their hands. The chaotic situation continued until the train chugged out of the station.

The railways has come under severe criticisms for failing to provide food, water and other facilities in trains, something highlighting the tragic tales of millions of migrants stranded by the Corona-induced lockdown and battling for survival at this critical time. In the past three days itself, around a dozen returnees and their children have died of hunger, heat, exhaustion and dehydration.

“We are not aware about the deaths of returning migrant labourers in trains due to hunger and water. The railways is providing enough food, water and all facilities to the migrants returning by these trains,” east central railway’s deputy general manager Alok Kumar Jha was quoted as telling The Statesman.