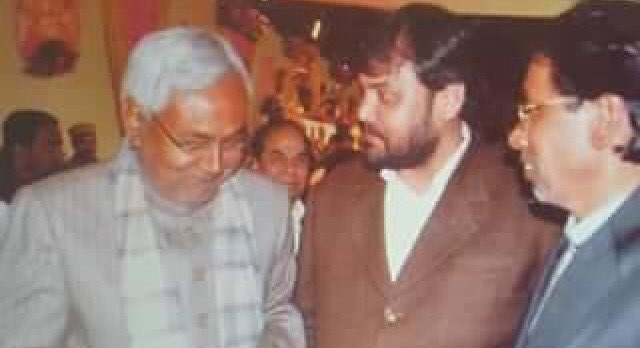 PATNA: It looks like Baccha Rai, the alleged kingpin of Class 12 Bihar Board toppers scandal, is no “Baccha” (child) in trade.

He appears to have connections with many heavyweight politicians in Bihar.

Yesterday, deputy chief minister Tejashwi Prasad Yadav had shared on his Twitter handle some photographs which showed a BJP minister Giriraj Singh sharing dais with Rai, principal of Vishun Rai College in Vaishali now in the eye of storms.

Now, a new photograph of the scam accused has gone viral in the social media.

Although it’s not clear where this photograph was taken, it looks like it was an “official function” as Rai along with other persons in the picture is seen in formal dress.

The release of this photograph is said to be in reply to the Tejashwi’s expose.

The Bihar toppers scandal has earned a very bad name for the state, forcing the state government to order a probe by Special Investigation Team (SIT).

So far, the SIT probing the scandal has arrested seven persons but one of the key accused in the case Lalkeshwar Prasad, former chairman of Bihar School Examination Board (BSEB), is still absconding.