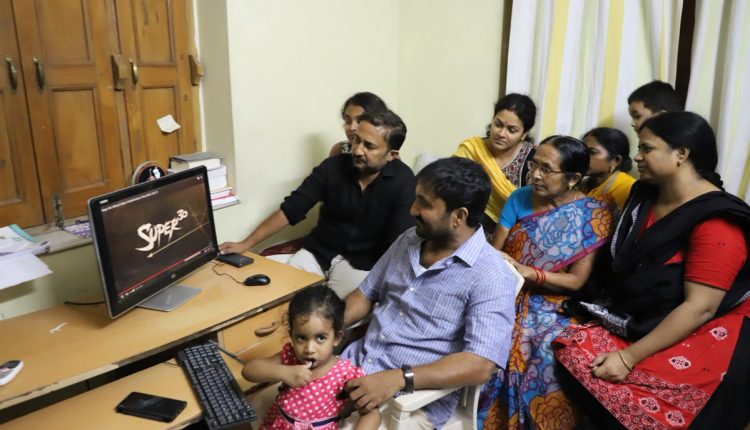 PATNA: The trailer of Vikas Bahl’s “Super 30” presenting the story of Patna-based mathematician Anand Kumar on the silver screen was finally out on Tuesday, bringing cheers in the family of the math wizard.

Hrithik Roshan who plays Anand in the move has not only undergone a dramatic physical transformation to suit the protagonist but also tried to get the Bihari accent right to make it look more real. The movie will be released on July 12.

The dialogue throws and body actions by Hrithik perfectly match that of Kumar, leaving the latter emotional. According to Anand, he was moved to tears while watching trailer which reminded his days of struggle.

Kumar’s twitter handle remained flooded with congratulations once the trailer was out today with many describing it as an inspirational one.

“Your life’s journey is quite an inspiration to both young and old alike Sir. Hats off to you #Super30Trailer,” tweeted @NicolaC19270429

Yet another twitterati commented, “  Hats off to you Anand Sir .. Proud of your dedicated efforts.”

Kumar is credited with transforming the life of hundreds of poor and unprivileged children through his innovative free coaching institute, “Super-30”.

In the past 16 years since it came into being, this free coaching institute which was included in the Best of Asia-2010 by Time magazine and listed as one of the world’s four innovative schools by Newsweek, has helped around 500 unprivileged children fulfill their long-cherished dream of cracking the prestigious Indian Institute of Technology (IIT) entrance examination.

Kumar set up the coaching institute in 2002 after his own dream of studying in Cambridge University in Britain crashed through midway due to severe financial crisis in the family. It’s for the kind of his devotion and dedication for the marginalized sections of the society that has earned him huge recognition globally.

Super 30, a highly ambitious and innovative education programme, runs under the banner of the Ramanujan School of mathematics. It hunts for 30 meritorious talents from among economically backward sections of the society and shapes them for India’s prestigious institution—IITs.

Only the selection of students for “Super 30” is said to be the key to the success in the highly competitive IIT-JEE exams such has been the reputation of this institute.

In an exclusive interview with TheBiharPost last year, Kumar had given certain tips to the students seeking success in life but asserted there was obviously no “short-cut route” for success.