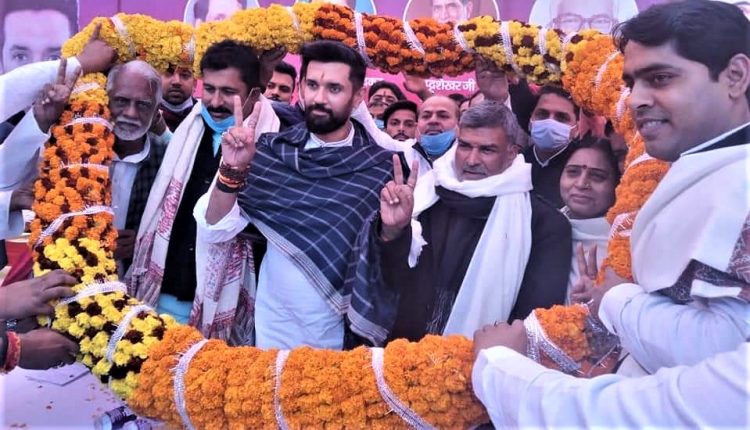 PATNA—Lok Janshakt Party (Ram Vilas) president Chirag Paswan has predicted for a mid-term elections in Bihar amid continuing conflicts in the ruling NDA.

Various constituents of the NDA, such as BJP, JD-U, Hindustani Awam Morcha (HAM) and Vikashseel Insaan Party (VIP) are at war with one another over various issues and have been issuing threats at regular intervals– a thing never seen in the past.

“Since the day assembly polls results came out, I have been saying that this government is not going to last. The straw in the wind is now for all to see,” Paswan was quoted as saying by PTI on Friday.

He added he could very much guess the prevailing political situation in Bihar when JD-U leader and chief minister Nitish Kumar launched state-wide yatra. The yatra launched last month, though, has been put on hold in view of surging Covid infections.

“Mid-term polls look imminent now. Chief Minister who does not venture out until faced with elections recently planned a state-wide tour,” he explained.

The conflicts in the ruling NDA first came to fore when the BJP and the JD-U indulged in bitter verbal spats over the issues of liquor ban and alleged denigration of Emperor Ashoka.

Very soon, the verbal duel started between the BJP and the VIP over fielding candidate from Bochaha assembly seat in Muzaffarpur during by-polls.

The VIP is angry that the BJP has planned to field its own candidate from this seat and has threatened to walk out of the NDA if the BJP did so. This seat has fallen vacant following the death of VIP legislator Musafir Paswan.

In a new twist to the whole development, the HAM led by former chief minister Jitan Ram Manjhi has asked the BJP to rein in its local leaders and stop them from attacking VIP chief Mukesh Sahani.