‘Bihar govt had no prior information about CBI raid on Lalu’ 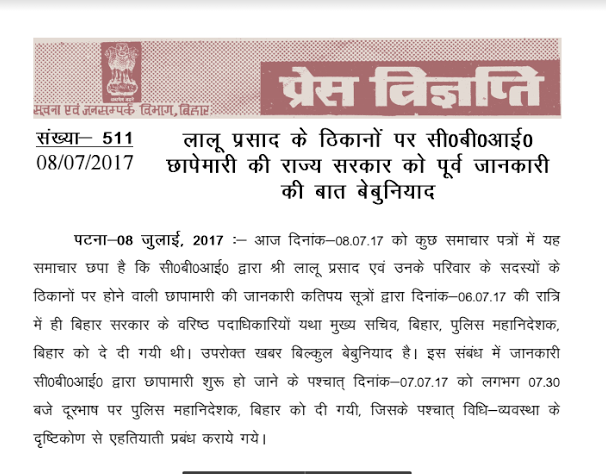 PATNA: The state government in Bihar today strongly denied the reports published in a section of media that it had prior information about the CBI raid to be conducted on the premises of RJD chief Lalu Prasad and his family.

“Such reports are totally baseless. The DGP, Bihar was informed about the raids by phone in the morning of July 7 only after the CBI raids had started,” a Press statement issued by the state government said on Saturday.

The statement said the local administration made adequate arrangements to maintain law and order in the state after it was briefed about the raids.

The rebuttal comes after a section of media today reported the state government had prior information about the raid plan.

According to the report, the Prime Minister Office (PMO) had told the chief minister over phone on late Thursday night that the federal agents were about to raid the houses of his deputy Tejashwi Yadav and RJD chief Lalu Prasad in alleged land-for-hotel scandal.