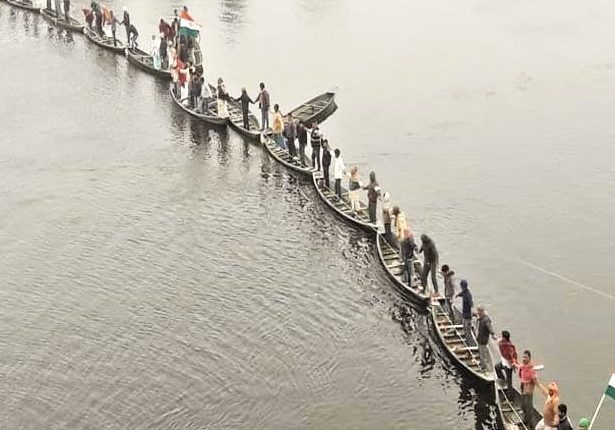 PATNA: Millions of people came out on the streets to form what authorities claimed was world’s longest human in Bihar on Sunday to create awareness about environment conservation.

The human chain over “Jal-Jivan-Hariyali Abhiyan” was led by chief minister Nitish Kumar who stood holding hands with party colleagues and others for about 30 minutes in Patna’s Gandhi maidan.

A statement issued from the office of the Chief Minister claimed more than 5 crores (50.16 million) people joined 18034 KM-long human chain formed across 38 districts of Bihar on Sunday.

The state government had hired 15 choppers and several expert photographers to shoot the human chain from above.

Earlier, the state government had formed human chain against alcoholism in 2017 and against dowry and child marriages in 2018.

Bihar Opposition leader and RJD legislator Tejashwi Yadav mounted heavy attacks on the state government for frittering away money in the name of forming human chain.

“When Bihar was in grip of floods, no helicopters were seen but the government hired 15-16 helicopters only to shoot human chain formation. This is compete waster of public money,” Tejashwi told the media on Sunday.

The RJD and the Congress boycotted the human chain programme but some of their legislators annoyed with their party leadership joined the programme in violation of the party stand.

They are most likely to be denied party tickets in the coming assembly elections in the Bihar due later this year.