Bihar floods: Was it Nitish Kumar who had demanded ‘dismantling’ of Farakka barrage? 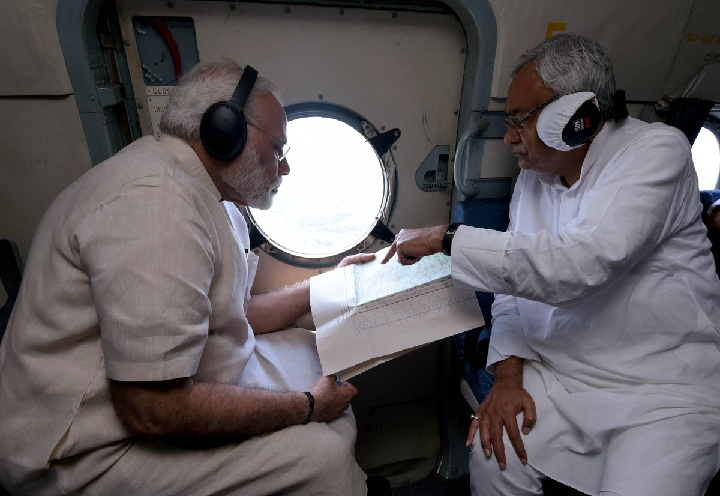 PATNA: He came, he saw from the above and he flew away but Bihar chief minister Nitish Kumar remained silent.

For the past over a year, Nitish Kumar had been demanding “dismantling” of Farakka barrage, blaming it for the recurrent floods in Bihar but when the Prime Minister reached Bihar last week on August 26 to conduct an aerial survey of flood situation in the state, the former skipped the issue.

This has baffled the common men as it was Kumar who had been raising the Farakka issue at various forums for the last over a year. This has amply indicted the raising of the Farakka barrage issue by him was just a “political move”, and had nothing to do with the reality.

Strangely, the very move has cost the state exchequer quite much as the state government held at least two big seminars over the issue and invited experts there to prove what the chief minister was saying is true, is the general complain of the masses.

The chief first raised the issue in August last year when he held Farakka barrage responsible for recurrent flood threats. He demanded removal of Farraka barrage over Ganga river to save the state from devastating floods each year.

Kumar made this demand before the centre after the turbulent Ganga and its tributaries caused floods in many districts of the state and also threatened to flood Patna, the capital of Bihar state.

“The main reason behind recurring flooding is siltation in Ganga apparently caused by the Farakka dam. The siltation has left the river shallow as a result of which even little rains in the catchment areas or discharge of water in the river leads to flooding,” was how Kumar told the media in Patna in August last year.

In February this year, state water resources department even organized two-day international seminar on “Incessant Ganga” in Patna which was attended by many experts. At the seminar, the experts went on calling the Farakka barrage “inauspicious”.

“Farakka is an inauspicious for Bihar, it is a curse which needs to be removed. Unless and until we remove, we can’t move forwards,” was how Magsaysay award winner Rajendra Singh said at the seminar.

Singh, more popular as “waterman”, said apart from the technological and engineering aspects of the barrage which have already been discussed much, several other aspect such as environmental, cultural, natural and spiritual also need to be discussed.

Another expert Himanshu Thakkar too made similar observation, seeking review of the barrage which, according to him has failed to fulfill any of the purposes.

At the seminar, chief minister Nitish Kumar himself sought for decommissioning of the barrage, blaming it for heavy deposit of silt in the river Ganga.

“Deposit of heavy silt in Ganga has wreaked havoc in Bihar. Even little rains flood the river which means flooding in parts of Bihar,” Kumar observed.

Three months later, the chief minister again inaugurated the two-day national seminar on “Obstacles in the Incesant Flow of the Ganga” at the India International centre in New Delhi. At the seminar, he again raised the same old issue.

Strangely, however, the chief minister failed to discuss this particular issue when the Prime Minister reached Bihar last Bihar over the same flood issue, reports said.