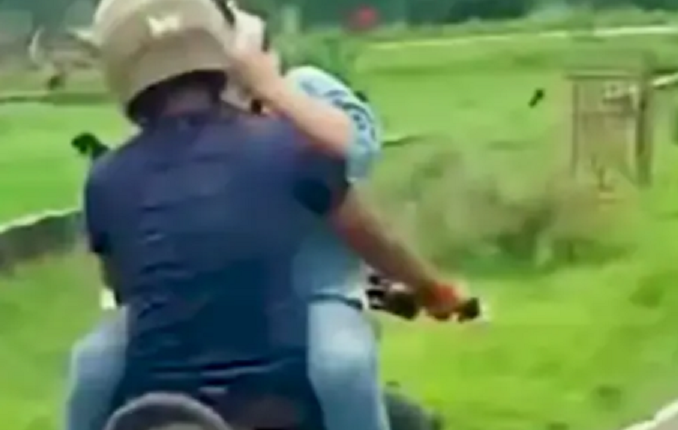 PATNA—A couple in Bihar faced moral policing from locals after they were seen indulging in an unusual public display of affection (PDA) on their moving Royal Enfield bike.

Abuses were also hurled at the young couple by the locals. The entire incident was recorded on camera and has been gaining traction on social media. Locals got enraged after they spotted a man riding a motorcycle with his partner sitting on his lap with both of them facing each other.

As the couple was driving through the countryside of Bihar, some commuters behind them noticed the duo’s activities and started filming it on camera. After a while, the girl realised that they were being filmed and raised her objection.

The villagers, however, stopped the couple’s bike and started criticising them over their ‘indecent behaviour in public. Seeing themselves surrounded by the angry locals, the frightened couple pleaded before them saying they will not return to their village ever. The viral video showed an old man lecturing the couple over their outing.

The location of the incident could not be ascertained, however, the man in the video is seen telling the locals that he is from Gaya district.

The video invoked different reactions from the netizens with some calling the locals “anti-romeo squad”, while another set of people questioning the couple’s behaviour. One user accused the villagers of overstepping their boundary, saying the same people would have turned a blind eye if some girl was being molested.

“That’s too stupid of the couple and serious violation of traffic laws,” another user pointed.

In 2015, a couple was captured on their bike in a similar fashion. The couple had come from Madhya Pradesh to Goa and were seen riding the motorcycle in a busy stretch. One of the commuters from behind took a photo which later went viral. The Goa police managed to track the couple and handed them a Rs 1000 challan for dangerous driving.