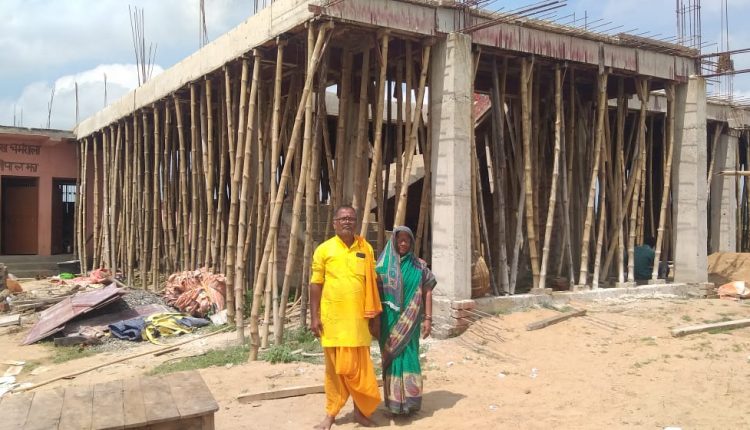 PATNA—In a unique tribute to their daughter, a couple from Bihar are constructing a shelter home for pilgrims and the poor from the money they saved for her wedding. The teenager died of a mysterious disease about 10 years ago.

Gopal Jha and his wife Sunita Devi, residents of Saharsa district in Bihar, began constructing a resting place for pilgrims after finding that hotels had been charging high rates. The building is being constructed along the road which leads to the famous Baidyanatha Jyotirlinga temple dedicated to the deity Shiva in Deoghar town of Jharkhand state.

Millions of devotees walk to offer holy water to the deity during the auspicious month of Shravan every year. However, this practice has been discontinued since last year owing to COVID-19 infections, fearing this could prove ‘superspreaders’.

The elder daughter of the couple stays in Jaipur with her husband. According to them, they had gone to the residence of their elder daughter in 2011 along with their younger daughter Priyanka Kumari, 19, when she suddenly felt severe pain in her right finger. Before they could admit her to any hospital, she collapsed.

Her death shattered the couple. They confined themselves to their home, limited their involvement in social activities, turned to religion and started paying a visit to the Hindu deity at Deoghar every month, but didn’t get peace of mind. Eventually, they decided to construct a hospice, a lodging for pilgrims who had been facing a lot of trouble in getting shelter on the way to the temple.

“She was a very promising girl and our pride but destiny willed otherwise. We thought nothing could be a better tribute to her than constructing a home for the pilgrims and the poor,” Jha said. He said he had saved Rs900,000 for his daughter’s wedding, but spent the entire amount for the construction.

“The first floor of the building is now complete but we want to add more floors to it,” Jha said, adding all the money saved for his daughter’s wedding had already been spent. He also had to sell his property to arrange more funds. The couple personally monitor the construction work at the site.

“This is an example for society where gender discrimination still prevails,” said prominent social scientist S. Narayan. He said such efforts would go a long way in changing the mindset of the people who still give more importance to sons than daughters.