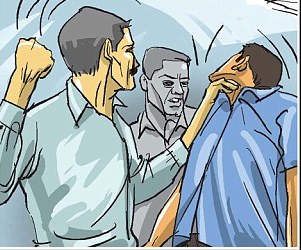 PATNA: A lawmaker from India’s ruling Bhartiya Janata Party (BJP) thrashed another party lawmaker after the latter allegedly misbehaved with his wife.

The shabby incident took place near the Council chairman office in the Bihar state assembly on Wednesday, leaving everyone stunned. The BJP is the main opposition party in Bihar.

Reports quoting local media said BJP legislator Neeraj Kumar Babloo came rushing to the premises, looking for his party colleague Lal babu Prasad and began assaulting him on being complained by his wife that he had misbehaved with her.

“I have got a written complaint in this regard. We will decide over the issue on Thursday,” Council chairman Awadhesh Narayan Singh told the media. The BJP has refused comment over the issue.