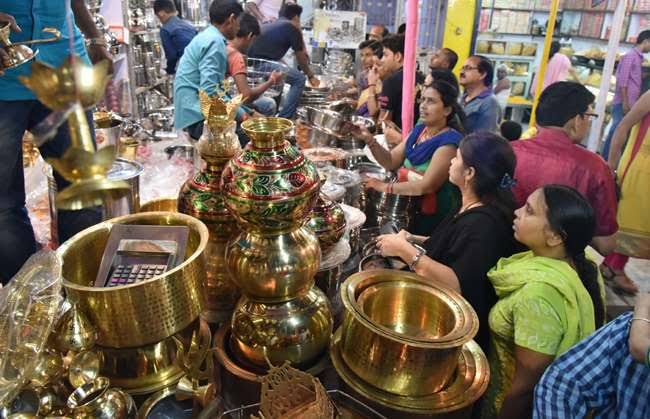 PATNA: People across Bihar did heavy shopping during Dhanterus on Friday, cocking a snook at so-called recession. According to industry sources, the total business crossed over Rs2,000 crore on a single day in Bihar.

Also, Patnaites withdrew Rs52 crores through ATMs on a single day on Friday which is 30 percent more withdrawal than the normal day. The total cash withdrawal from ATMs in the whole Bihar, however, stood at Rs260 crores, as per reports.

Also Read: Pakistan in Bihar to be renamed as ‘Birsa Nagar’

“Total business crossed over Rs700 crore in Patna and the sectors which pushed the markets were jewelry, automobile, furniture and electronic items,” Confederation of All India Traders president Kamal Nopani told a local media.

According to reports, maximum rush was seen in jewelry markets where total sale was reported at Rs650 crores. Likewise, vehicle sector did brisk business with approximate sale of Rs570 crore. Electronic goods, mobile phones and furniture too did brisk business.

Reports said some 1,400 cars which included six BMW cars and an Audi Q, and 9,500 two-wheelers were sold during the occassion. One of the car sold cost Rs90 lakh whereas the maximum price of a bike sold was Rs3.49 lakh.

Not only that a customer even purchased Samsung TV set which cost Rs11 lakh while another customer bought necklace set worth Rs15 lakh, according to media reports.

“Customers’ response was very good during Dhanterus. We hoped for that,” Bihar Chamber of Commerce and Industry president PK Agarwal said.

Another trader and Bihar Industry Association president Ram Lal Khetan said there was no shade of recession during Dhanterus. “Every sector did brisk business,” he added.