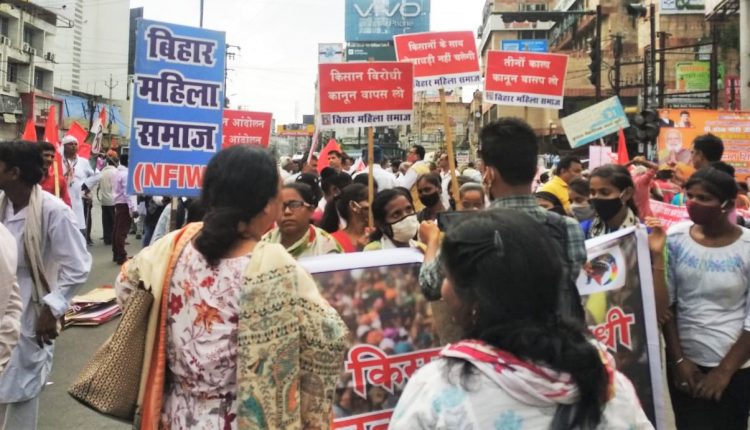 PATNA—Angry protesters blocked roads and rail traffic in many parts of Bihar to protest three controversial farm laws. The call for Bharat bandh was given by Samyukta Kisan Morcha, a united forum of farm unions protesting against these laws.

Daylong strike threw normal life out of gear as road traffic remaining badly disrupted with the auto union joining the strike and the buses remaining off the roads. Railway services also remained disrupted in several parts of the state.

The shutdown also disrupted the functioning of educational institutions while business establishments remained only partially affected.

In Bihar, several opposition parties such as the RJD, Congress and the Left lent their support to the nationwide shutdown and protested on the streets with posters and banners. The bandh passed off peacefully.

Shouting slogans and carrying posters in hands, the RJD supporters blocked Gandhi Setu which connects North Bihar with the state capital, leading to huge traffic jam as commuters waited in the sizzling heat.

Bihar opposition leader Tejashwi Yadav who himself remained missing from the protest site slammed the Centre for constantly ignoring the demands of the farmers.

“The heart, mind and soul of that government, which does not feel the pain and suffering of the donors, is barren,” Tejashwi said, adding the country would  never prosper by ignoring the farmers who are the backbone of the country.

The farmers’ movement against Centre’s three agri laws, in the meanwhile, completed one year today. However, farmers and opposition parties don’t appear in any mood to give up their demand.

“Our Bharat Bandh was successful. We got full support of farmers. We are ready for talks on the issue but (currently) no discussions are taking place,” Bhartiya Kisan Union (BKU) leader Rakesh Tikait told the Indian Express.