Begusarai: An industrial hub and Epicentre of art & culture 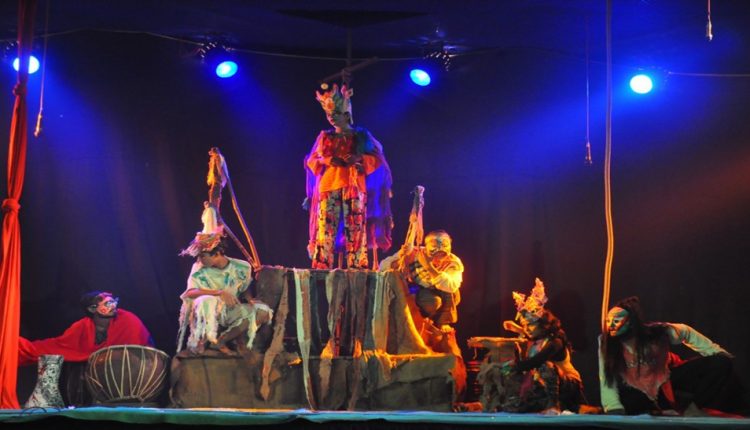 Unfortunately, amidst the cacophony of industrial machinery, the melody of theatrical art and culture, unique to this district, often goes unnoticed especially beyond the boundaries of Bihar. Begusarai has had a rich history of art and culture, legacy of which continues to find manifestation in its thriving theatre scene today.

At present there are various theatre groups running simultaneously in Begusarai which have managed to keep up with this art form. There is Indian People’s Theatre Association (IPTA), Bal Rangmanch, Modern Theatre Foundation (MTF), Aashirwad Rang Mandal and Humrahi, to name a few. Even during the lockdown when cultural activities were prohibited, they organised online workshops instead of going into a forced sabbatical.

Amit Roushan, who is currently serving as a secretary in Aashirwad Rangmandal (started in 1987), credits the sustenance of theatre groups in Begusarai to the zealous efforts put in by IPTA since its ingress in the district.

“Since IPTA is the cultural wing of Communist Party of India (CPI) and CPI has had a stronghold in the district once, many theatre groups emerged here”. Besides, it is the “presence of healthy competition amongst the existing theatre groups of the time, which makes the scene what it is,” he added.

Hrishikesh Kumar, who runs a children theatre group by the name of Bal Rangmanch, feels that the thriving theatre scene can be linked to the artistic undercurrent which has been present in Begusarai ever since. “Begusarai is the birthplace of not just the eminent Hindi poet Ramdhari Singh ‘Dinkar’, but every generation here has been blessed with a prolific set of poets, actors and writers,” he said.

Themes of the Plays: From Contemporary to Folk

Themes of the plays performed by these theatre groups generally revolve around the issues relevant to the society or pandering to a larger humanitarian issue like climate change or preservation of environment. Sometimes they also go back to performing their folk art forms with a motive of imparting a message of hope.

Talking about the plays performed by Aashirwad Rangmanch, Roushan said, “We often choose plays by Dharamvir Bharti or Premchand and improvise it according to any contemporary issue.” The last play performed by this group was ‘Makbare ka Rakhwala’ which is an adaptation of a Kafka’s story with the name ‘The Warden of the Tomb’. The play satirises the absurdities of life by questioning societal norms.

Apart from these existential themes, there is also room for pantomime plays which are exclusively done by Bal Rangmanch. Kumar feels that there are ample issues catering to children that should be explored like the effect of social media on their mental health. “Children manoeuvre around such themes with ace, one just needs to tap into their potential to bring out the best from them”.

Moving away from contemporary issues, MTF is more inclined towards the traditional folk themes. Parwez Tausif, who runs this theatre believes that such themes are more capable of grabbing audience’s attention as compared to contemporary ones. Through its plays, MTF has tried to pay homage to the great Bhojpuri poet, actor, playwright and folk singer Bhikari Thakur.

“Keeping the premise the same, we packaged Thakur’s much celebrated work ‘Bidesiya’ into a modern form by using light and sound techniques,” explained Tausif. ‘Bidesiya’ revolves around women empowerment, migration and poverty.

Running a Theatre Group in Begusarai: An Uphill Climb

Funding is certainly fundamental to any creative endeavour such as theatre. Every play production has its own demands like technical tools, props, talent accommodation and so on, based on what the script mandates.

The theatre groups of Begusarai do suffer due to financial crunches. Minimum cost of setting up a play in Begusarai ranges between Rs 50,000 to 1,00,000. “As the grants by the Ministry of Culture (Bihar) are highly erratic, we rely on the contributions made by our group members and sponsorships by private companies,” said Roushan.

The theatre scene in Begusarai is marred by a low return on investment. A very apparent reason for this low return is that the audience is less likely to buy a ticket for a play than for a movie which is their obvious choice of entertainment.

ALSO READ: Bihar govt announces to give Rs15,000 to girls and Rs10,000 to boys born at flood relief camps

According to Tausif, people need to shun their entertainment-centric perception and see theatre as a means to seek the expression of their innermost feelings, especially during a period of social fragility and unrest. “Until that happens,” he feels, “Theatre cannot be seen as a realistic path to professional development, in a conventional sense”.

This drawback has also crippled the enthusiasm of artists. Artists here can only afford to invest their time in theatres as per a passionate hobby and not a full-time job. The families of these artists are also very apprehensive about the profession.

Rintu Kumari, who has been working as an artist with Ashirwad Rangmandal since 2001, said “One may work as a full-time theatre actor/actress if one is passionately driven, but that passion is incapable of paying the bills”.

Elaborating on why parents have qualms about the art form, Hrishikesh Kumar explained, “This art form is not a money-spinner. No parent would want their children to end up as a starving artist. Their disapproval is rooted in this fear and it is understandable”.

Apart from this, Kumar also highlighted a major issue in their industry, which is the lop-sided gender representation. His group, Bal Rangmanch has 15 boys against 5 girls, at present. “I started my group with 5 girls in 2013 and the number still remains the same. The parental push-back is significantly more in case of girls,” he added.