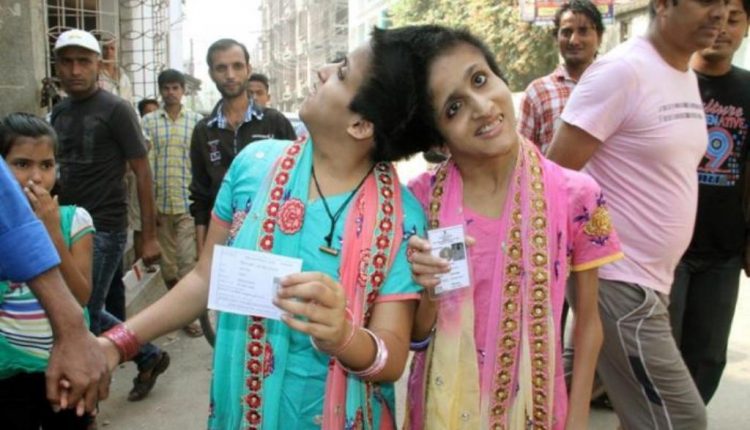 PATNA: At a time when the falling poll percentage remains a matter of serious concerns in the country, the enthusiasm of bed-ridden conjoined sisters for votes has become a hot topic of discussion in Bihar.

Bihar’s best-known Siamese twins Saba and Farah joined at the skull since birth are waiting eagerly to reach the nearest polling both to cast their vote and help form a new government at the centre.

What makes their enthusiasm special is that the 23-year-old conjoined twins have been bed-ridden for months yet they want to go to the booth in the hot and humid weather and exercise their franchise.

“Each vote is precious for the country and so we will vote. We have already decided about the candidate we will be voting for,” Saba and Farah told the media today. Both are residents of Samanpura locality in Patna. Both will go to the Madarsa Islamia polling booth located in Samanpura locality of Patna.

Authorities hope the conjoined sisters’ move could motivate the voters to shun dullness and join the polling process. Bihar poll percentage has remained at an average 57 percentage in the past six phases of polling despite all efforts by the administration to push them up.

The twin sisters have a common blood drainage system for their brains and also only one of them has kidney. Farah’s kidneys are of great help to Saba who has no kidney.

Yet another interesting thing about them is that the twins have entirely different behavior, habits and tastes. If Saba, in normal times, loves eating cooked rice, Farah prefers bread. If one sleeps, the other is awake. One falls sick, the other does not.

The twins came into limelight 10 years back when the Crown Prince of Abu Dhabi offered them financial support for their surgery after seeing their appalling photographs in newspapers.

Subsequently, their case was examined at a Delhi Hospital by a US Neurosurgeon Dr Benjamin Carson, director of paediatric neurosurgery at Johns Hopkins children centre in Baltimore.

After examining their case way back in April 2005, Dr Carson had expressed hope of a successful surgical operation to separate the twin sisters but the family rejected the surgery offer apprehending they may not survive.

As of now, they lie bed-ridden at their home with their father taking all care of his twin daughters with a petty income coming from a small tea stall.

At his maiden Press conference too, Modi does ‘Maan Ki Baat’ as Shah takes all questions