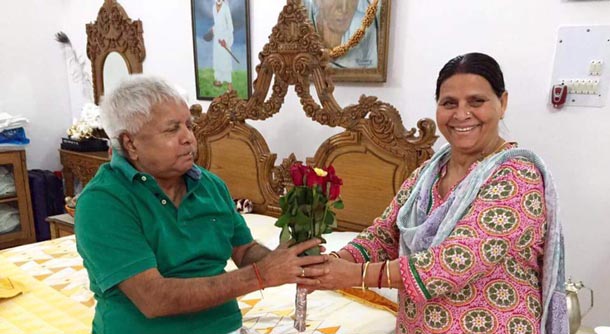 PATNA: A huge crowd of well-wishers, party leaders and ministers rushed to the 10, Circular Road in Patna to extend wishes to RJD chief Lalu Prasad on his 69th birth day today.

Bihar chief minister Nitish Kumar rushed to him in the day and extended birthday greetings with a warm hug before the camera. Prasad reciprocated by eating the chief minister a sweet in his mouth with his own hand.

“The entire life of Laluli is full of struggles. It’s indeed a great achievement for a man from such an humble background reaching this height without anyone’s support,” Kumar told the media on this occasion.

The birthday festivities began quite early with wife Rabri Devi presenting Prasad a bouquet of roses right when the clock struck 12 on Friday night to celebrate this special occasion.

TV footages also showed Prasad in his informal dress cutting a small cake at night in his bedroom in the presence of his family members.

Jubilant supporters, on the other hand, offered him a 69 kg garland of flowers, 69 kg sweets and also 69 pound of cake to mark this occasion celebrated as “Social Justice Day”. They also offered a ‘chadar’ on the mazar.

The entire Patna appeared having turned into green with large number of banners, posters and billboards coming up to extend Prasad’s birthday wishes.

This birthday was very special for the RJD with his party coming to power after a full decade.

While Misa has been nominated to Rajya Sabha, her two brothers have become ministers in the Nitish Kumar government.