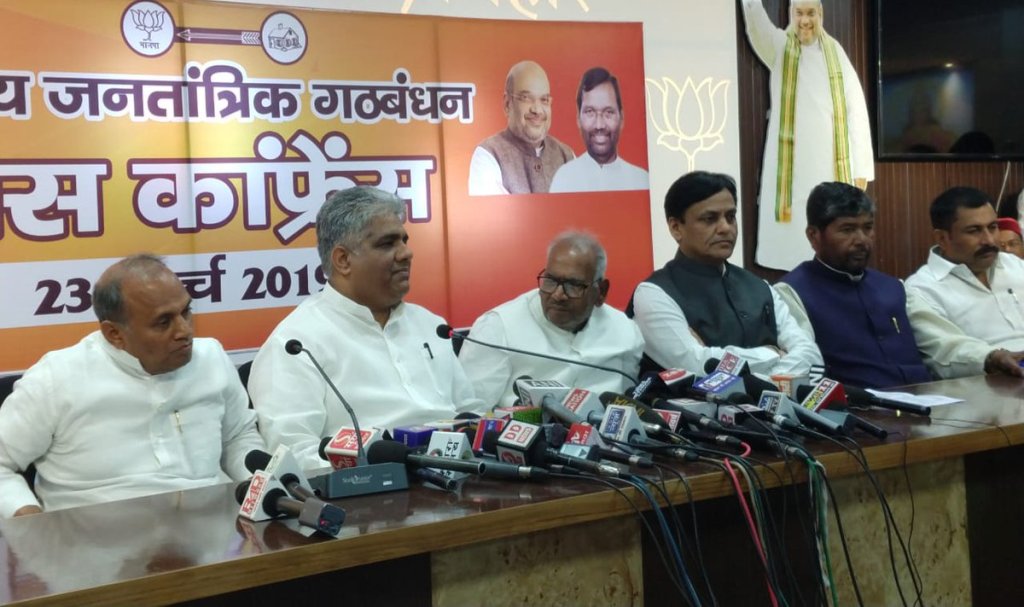 PATNA: The ruling National Democratic Alliance (NDA) is battling hard to throw out tough challenge to the opposition Grand Alliance in Bihar as the overall contest has turned straight, giving little hope of split in secular votes.

The consolidation of Yadav, backwards and Muslim voters are yet another thing of worry for the NDA which now banks on the support of chief minister Nitish Kumar’s “development planks” and Lok Janshakti Party (LJP) chief Ram Vilas Paswan’s Dalit image.

In the last 2014 LS polls, the NDA had emerged victorious on 31 out of Bihar’s total 40 Lok Sabha seats and the experts said this happened mainly because the two major political rivals in the state—chief minister Kumar who heads the Janata Dal United (JD-U) and Rashtriya Janata Dal (RJD) president Lalu Prasad had gone it alone in the elections.

This had turned the contest triangular on most of the seats as the NDA candidates easily emerged victorious due to sharp split in secular votes.

The overall situation cane very well be underlined from the fact that at around 15 seats, the victory margins of NDA candidates hovered between roughly 6,000 to 60,000 votes.

A case in point is Samastipur seat where the Congress candidate lost the seat by mere 6,000 votes as the JD-U caused heavy split in the secular votes. The JD-U candidate Maheshwar Hazari had polled over 200,000 votes.

Taking a lesson from the past mistakes, however, the secular parties this time have formed a mega alliance nicknamed Secular Alliance which includes the RJD, Congress, Rashtriya Lok Samata Party (RLSP), Hindustani Awam Morcha (HAM) and Vikashsil Insan Party (VIP) while it has entered into seat understanding with the CPI-ML, a major left party.

Experts say the coming together of these parties is bound to send shockwaves to the NDA this time. Moreover, the Narendra Modi wave is totally missing this time as was evident from the low turnout of voters in the first phase. A little about only 53 percent voters cast their votes in the first phase.

ALSO READ: A tale of 3 politicians: How they tried to be smart but now repenting for their acts

Now, Sidhu under fire for urging Muslim voters not to split their votes