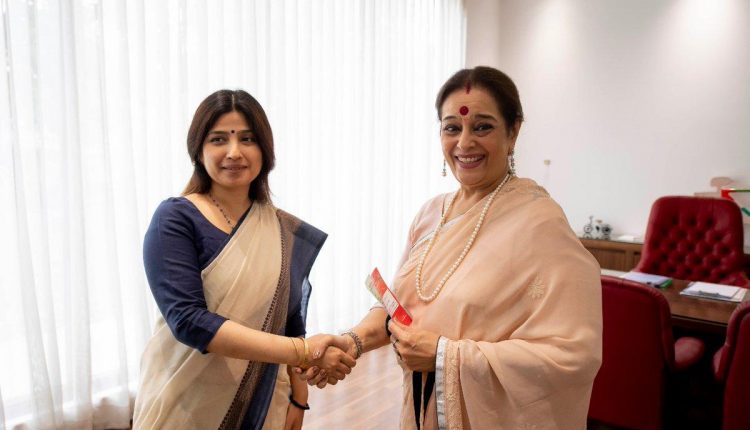 Lucknow: The fight for Lucknow has turned very much interesting now with Poonam Sinha, wife of Bollywood actor-turned-politician Shatrughan Sinha, finally joining the Samajwadi Party (SP) on Tuesday after days of speculations.

She will be the joint candidate of the SP-BSP-RLD in Lucknow from where Union minister Rajnath Singh of the BJP is seeking re-election.

Sinha was welcomed into the party by Dimple Yadav, wife of SP chief Akhilesh Yadav.

That she will be contesting against the Union home minister became clear very soon after SP leader Ravidas Mehrotra appealed to the Congress not to field its candidate from Lucknow seat.

Ravidas Mehrotra, SP: Poonam Sinha ji (wife of Shatrughan Sinha) will be the SP-BSP-RLD candidate from Lucknow. She will file nomination on April 18. We appeal to the Congress that do not field your candidate from here so that BJP can be defeated. #LokSabhaElections2019 pic.twitter.com/Xp2y3M6Wz1

Rajnath said he was ready to face anyone in the battle. “Yes, somebody must contest, that’s the beauty of democracy,” said the union minister.

The decision to field Poonam Sinha as the joint opposition candidate against Rajnath is said to be an attempt by the opposition parties to keep the Union Home Minister confined to his constituency.

Media reports have said it was the strategy preparation over the issue that had delayed induction of Bihari Babu into the Congress. Shatru who hails from Bihar’s Patna town finally joined the Congress on April 6.

HM Rajnath Singh on Poonam Sinha to contest against him from Lucknow as SP-BSP-RLD candidate: Yes somebody must contest, that is the beauty of democracy. We will fight elections with full dignity, tehzeeb jo Lucknow ki bohot badi dharohar hai usko bhi hum kayam rakhenge. pic.twitter.com/rtFHtIxuqi

Given the caste composition of the Lucknow LS seat, the battle will indeed be tough for Rajnath once she formally joins the poll fray as the joint opposition candidate.

As per the report, this constituency has around 4 lakh Kayastha voters and 3.5 lakh Muslim voters, in addition to 1.3 lakh Sindhi voters. Poonam Sinha is a Sindhi while her husband Shatrughan Sinha comes from Kayashtha community, reports said.

In the last 2014 LS polls, Rajnath had won the seat with a huge margin of over 2.72 lakh votes, defeating Rita Bahuguna Joshi of the Congress. The BSP and SP candidates had stood at distant third and fourth positions.