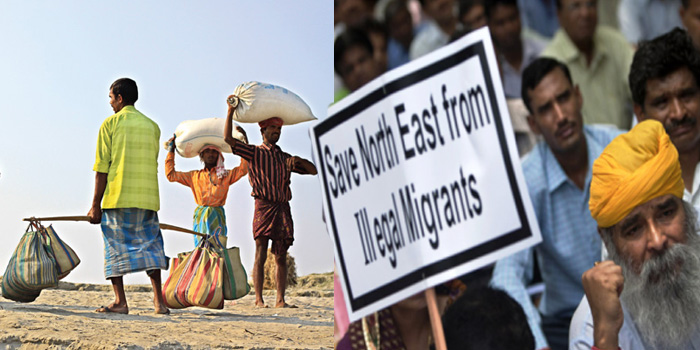 By Our Correspondent
Guwahati: Patriotic People’s Front Assam (PPFA) has reiterated its stand to detect all immigrants from the then East Pakistan and later Bangladesh with the national cut-off year (1951) and urged the Union government in New Delhi to think about offering work permits (without voting rights) to them in case their deportation becomes impossible because of arising serious humanitarian and international crisis.

The forum in a statement argues that the immigrants who entered India after 1951 till 16 December 1971 should be treated as East Pakistani nationals, as Bangladesh emerged as a sovereign nation only after 16 December (not 25 March 1971 as often reported in the media), when Pakistani soldiers surrendered to the Muktijoddhas (forces of Bangladesh freedom struggle).

“The volume of East Pakistani nationals (from 1951 to 16 December 1971) must be identified on priority basis and they should bedeported. If we apprehend any unavoidable humanitarian crisis, those people may be given work permits to stay in India but without the power to participate in the State-recognized electoral process,” said the PPFA statement.

It, however, strongly argues that the immigrants from Bangladesh (who came after 16 December 1971) must be detected and deported.

The forum also appealed to Sarbananda Sonowal led government at Dispur to support the 1951 as cut-off year for detection of foreigners in the Supreme Court, as the case is presently in its jurisdiction.

In another aspect, the forum commented that once the citizenship amendment bills  are duly passed in the Parliament, all the Hindu, Buddhist, Christian refugees should be rehabilitated with equal distribution across the country.

“Among them, those who prefer to stay legally in Assam should adopt Assamese language as their medium of instructions with an aim to promote the Assamese culture and thus contributing for a stronger and safer India. It will also help removing the linguistic threat perception to the indigenous populace of the State,” asserted the statement.

As the spirit of Assam Movement (1979 to 1985) was to deport all foreigners with the cut-off year of 1951, for which over 850 martyrs, including Khargeswar Talukder being the first, sacrificed their lives, the forum finds reasons in supporting the same.

However, the PPFA maintains that it would abide by the verdict of the apex court over the matter.