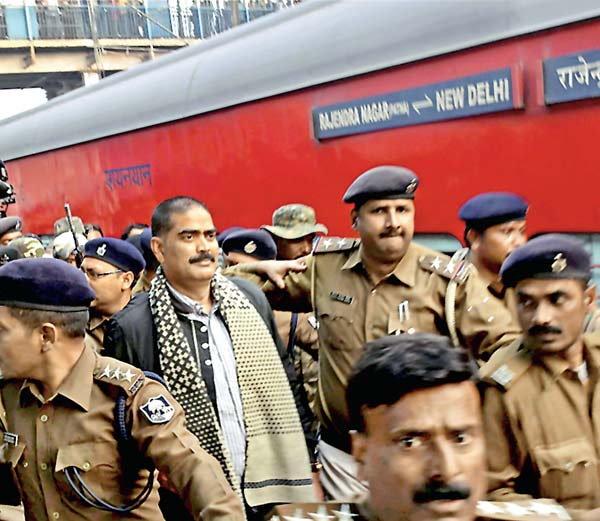 PATNA: The factors leading to the shifting of controversial RJD politician Mohammad Shahabuddin to Tihar jail and his subsequent treatment in transit are something which is likely to cost the ruling Grand Alliance government dear in Biihar.

One got a clear hint of this when the supporters of Shahabuddin shouted vociferous slogans against both chief minister Nitish Kumar and RJD chief Lalu Prasad once the train carrying him reached the New Delhi railway station.

The shouting supporters blamed the ruling GA government, comprising the RJD, JD-U and the Congress, for his “rude” treatment, as per media reports.

Slogans against Kumar appear “understandable” given the fact that the state government wasted no time in moving the Supreme Court to challenge his bail granted by the Patna High Court. This followed when the jailed don described Kumar as a “chief minister by circumstances” while coming out of Bhagalpur jail in September last.

At the same time, he had described RJD chief Prasad as his leader saying “I have been with RJD and will die with the RJD,” was how he had said then.

Given this background, the vociferous slogan-shouting against the RJD looks to be a “warning signal” for the RJD.

His supporters are angry at the way the RJD despite being a coalition partner in the Nitish Kumar government has maintained a studied silence and didn’t intervene in the matter even a little bit despite Shahabuddin has been so loyal to the party all through his political career and didn’t look towards others.

In fact, the problems for Shahabuddin started soon after Siwan journalist Rajdeo Ranjan was shot dead in May last year. The killing virtually opened Pandora box for the RJD don.

While on the one hand, the murder case was handed over to the CBI to probe the political conspiracy behind the murder, on the other the matter also reached the Supreme Court which ultimately ordered him to be immediately shifted to Tihar.