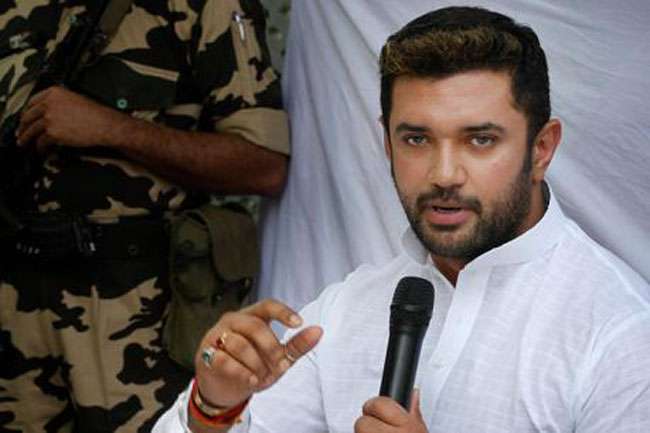 PATNA: Amid allies slowly dumping the ruling National Democratic Alliance (NDA), the Lok Janshakti Party (LJP) today expressed doubts over performance by the Bhartiya Janata Party (BJP) in the next Lok Sabha polls due in 2019.

The LJP which is headed by federal minister Ram Vilas Paswan is a key constituent of the BJP-led NDA from Bihar.  The LJP has six members in the Lok Sabha.

“It’s a matter of concern that the BJP is fast losing by-elections to Lok Sabha seats. Given this situation, the going could indeed be tough for the BJP in the next parliamentary elections,” parliamentarian and LJP parliamentary board chairman Chirag Paswan told the media today. Chirag happens to be the son of party chief and federal minister Ram Vilas Paswan.

He said the BJP leadership should think over seriously why these were taking place. “The issue is not only the defeats (in LS by-polls). Allies too are slowly quitting the NDA? First Shiv Sena quit the NDA and now TDP has followed suit. Likewise, in Bihar Jitan Ram Manjhi’s Hindustani Awam Morcha (HAM) has walked out of the NDA and there are now reports that our other ally, Rashtriya Lok Samata Party (RLSP) too is headed for the Grand Alliance,” said Chirag.

He asked the BJP to ponder as to why the allies were slowly getting annoyed with the Hindu nationalist party and also why the mood of the country is changing. “My observations don’t mean the LJP too is dumping the NDA but the BJP will have to seriously think over why the allies are slowly dumping the NDA,” Chirag who represents Jamui seat in Lok Sabha said.

“The BJP indeed is gaining new grounds and, may be, it is able to win Karnataka state polls too but the moot question is why the party is unable to save its winning seats in the by-polls? The by-polls results say you are losing in the places where you won earlier. Why this is happening now? This must be set right then and there or the going could be really tough in 2019 LS polls,” explained Chirag.

He said none had expected the embarrassing defeats in Gorakhpur and Phulpur LS by polls in Uttar Pradesh. “We lost Araia and Jehanabd in Bihar too,” he rued. “Bypoll results a spirit dampener. But carries message that a little course correction may not be out of place. PM’s persona remains unassailable but in UP/Bihar strategies may have to be reworked,” he tweeted.

The observations came shortly after the Shiv Sena painted a gloomy picture of the next LS polls predicting the BJP’s tally may drop by 100-110 in the next elections.

“In 2019, the BJP’s numbers will not be 280, but it will plummet by at least 100-110 seats. The elections are not being fought in Russia, America, Canada, France or Israel, but in India. So they (BJP) should keep their feet on the ground here,” the Sena warned in a tough edit in the party mouthpieces, ‘Saamana’ (Marathi) and ‘Dopahar Ka Saamana’ (Hindi).

Though the BJP claims, the Sena edit piece mentioned, that by-elections do not reflect the mood of the country, ever since Prime Minister Narendra Modi took over, the party has lost nearly nine seats in Lok Sabha by-polls, slashing its tally from 282 to around 272 – the half-way mark in the 543-strong Lower House.

12 killed as speeding bus falls into roadside pit in Bihar