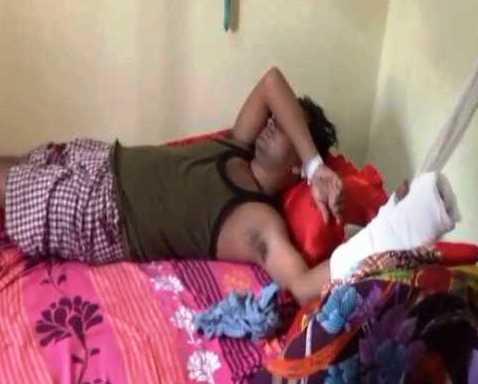 PATNA: Angry road robbers chopped off fingers of a would-be groom in Bihar on Sunday after failing to any jewelries or valuables from him.

The victim identified as Kapil Kumar works as a professor in a local private college and his wedding was to be solemnised on June 3. The horrible incident took place in Gaya district of Bihar on Sunday night.

As per reports, victim was returning to his home at night on his bike after distributing invitation cards among his relatives and friends for his marriage when the robbers stopped him at a secluded place and searched him extensively hoping to lay their hands on gold rings and other valuables which they didn’t.

Reports said after failing to get anything from him, angry robbers attacked him with a sharp-edged weapon and chopped off his fingers from his left hand before fleeing the scene. Hearing his cries, the local villagers rushed to the spot and admitted to a local hospital for treatment. His condition is still stated to be critical.

“Where is the money you got as dowry? If you are not carrying right now, just part with your gold rings which you may have got as dowry. When they failed to get anything from me even after extensive searches of my pockets, they thrashed me badly and chopped off four fingers from my left hand,” was how the victim told the local police.

The victim has registered a case with the local Bodh Gaya police station. The police are investigating the case. The incident comes barely five days before his marriage was to be solemnised. It’s not however known if the wedding schedule has been deferred.

Last month, criminals had shot dead a groom at the wedding venue just when he had exchanged garlands with his bride and was returning to his car. A police investigation later found that the groom was shot dead by his bride’s ex-boyfriend. Police have arrested the accused and sent him to jail. The incident took place in central Bihar’s Bhojpur district.

In another incident reported from the same district on Saturday, a groom fled the marriage venue and took shelter in a poultry farm when some masked men attacked the guests and thrashed them baldy. Several relatives of groom were injured in the attack. It was after much effort that the wedding could be solemnised finally.