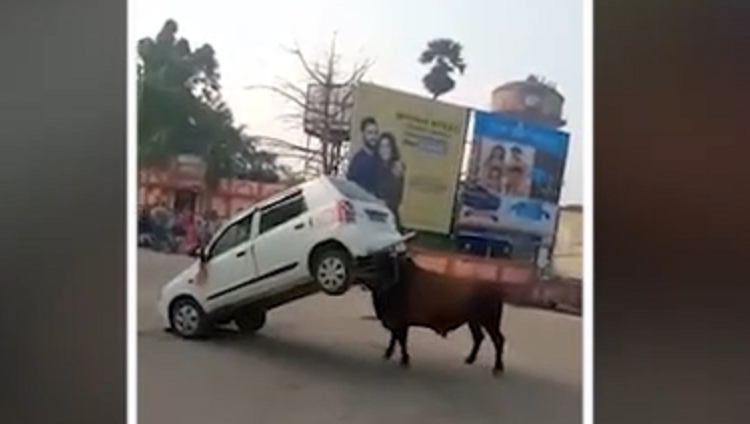 PATNA: A loitering bull on the streets of Bihar has gone all out to check unnecessary honking!

Apparently irked at the blaring sound of horns fitted on motor vehicles, the bull has been attacking vehicles blowing horns in Hajipur, the headquarters of Vaishali district. In the past two days, it has damaged two vehicles.

In a video which has now gone viral in the social media, the bull can be seen lifting the car with its horns and then turning it in the middle of the road a couple of days ago.

According to witness, the bull went berserk soon after the car owner blew horns. As such, the car owners wanted to alert the pedestrians passing through the roads but its sound irked the bull so much so that it chased the car, lifted it through its horns and then pushed it in the middle of the road.

In the next 10 minutes, the bull continued lifting the car in various ways and the throwing on the ground to express its anger. Eventually, some villagers threw cold waters to drive the bull away. Initially the bull resisted but finally went away.

On Tuesday again, the bull attacked an auto-rickshaw after the driver blew horns. Angry bull soon rushed towards the vehicle and lifted it with its strong horns for sometime until the local residents poured cold water to drive it away.

Also Read: Pakistan in Bihar to be renamed as ‘Birsa Nagar’